A distracted driver plunged his car into a river just 10 minutes after passing his driving test. 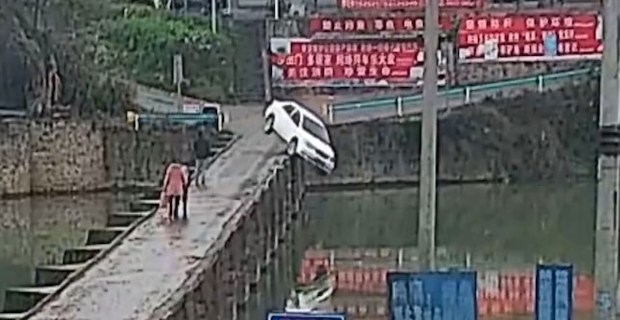 The dramatic moment the young motorist drove his car into the water was caught on video. The incident took place on Laoping Bridge in the Chinese province of Guizhou. Mr Zhang was distracted reading messages on his mobile phone congratulating him for passing his driving test when he swerved into the canal.

Footage shows the new driver turning left onto the bridge, which three people were walking along. He then veers off the side of the road with his vehicle dropping into the river.

Stunned onlookers watched as the white car bobbed in the water. Mr Zhang managed to escape by forcing open the passenger door. He said: ‘While I was driving, I tried to grab my phone and read some messages while two people were in front of me on the bridge.

‘I became nervous and turned left suddenly. ‘Luckily, the car floated for a while. ‘I couldn’t open the driver’s door so I had to kick open the door on the other side. v

‘Otherwise, I may never have got out as my hand was dislocated in the chaos.’ He was helped to safety by locals and given dry clothing.

Police arranged for his car, which they said was newly registered, to be lifted from the river. It is not known if officers are taking action against the young motorist over the incident.

Keywords:
Driving Test
Your comment has been forwarded to the administrator for approval.×
Warning! Will constitute a criminal offense, illegal, threatening, offensive, insulting and swearing, derogatory, defamatory, vulgar, pornographic, indecent, personality rights, damaging or similar nature in the nature of all kinds of financial content, legal, criminal and administrative responsibility for the content of the sender member / members are belong.
Related News