‘Those evil and twisted individuals who tried to destroy our shared way of life will never succeed,’ Mayor Sadiq Khan says 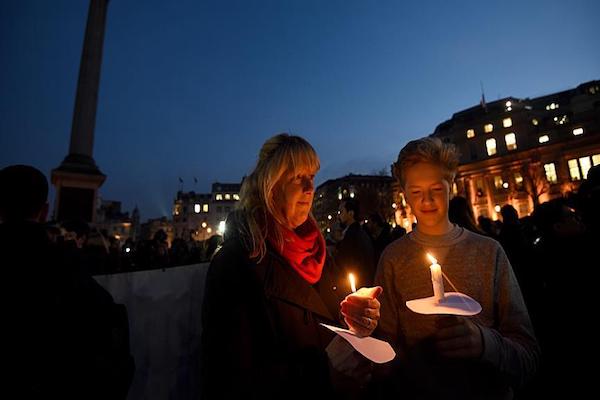 MPs and members of the Metropolitan Police were among those who held lit candles in honor of the victims. Police raised the death toll from the attack to five after the death of a 75-year-old man late Thursday. “Those evil and twisted individuals who tried to destroy our shared way of life will never succeed and we condemn them,” Mayor Sadiq Khan said in an address to the crowd. “London is a great city full of amazing people from all backgrounds and when Londoners face adversity we always pull together. We stand up for our values and we show the world we are the greatest city in the world,” he said. Police on Thursday identified the assailant in the deadly attack as Khalid Masood, 52, who was shot dead by police after stabbing a policeman to death. Masood was born in Kent, southeast England.

In a statement to parliament earlier in the day, Prime Minister Theresa May said Masood was a U.K. national who was known to intelligence services after being previously investigated for links to terrorism. Masood drove into pedestrians who were on the Westminster Bridge, killing at least two victims and injuring dozens of others, before fatally stabbing Police Constable Keith Palmer, 48. Some of the other victims were identified as Aysha Frade, a Spanish teacher whose father was a Turkish Cypriot, and Kurt W. Cochran, a U.S. tourist. “Our response to this attack on our city, this attack on our way of life, this attack on our shared values, shows the world what it means to be a Londoner,” Khan added. Twenty-nine people injured in the attack are still being treated at the hospital. Seven are in a critical condition.