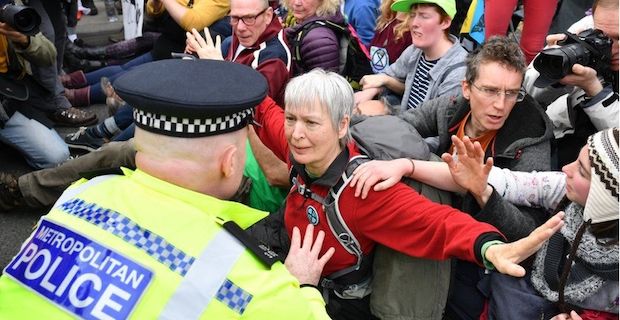 The number of arrests in ongoing road blockages by environmentalist protesters has risen to roughly 300 in London, the Metropolitan Police said Wednesday. The updated number by police came after more than 200 arrests as the protest brought London to a standstill with some roads in the city blocked since Monday morning.  London's Metropolitan Police issued a public order condition as of Monday evening, which means that protesters should leave the scene when they are asked to.

"The same condition has been implemented to those in the Oxford Circus area," police said.

The condition has since been “extended for a further three days.”

“In order to impose this condition, the Met required evidence that serious disruption was being caused to communities in London,” police said.

Updating the number of arrests as 290 in a new statement, police asked all protesters to move to the Marble Arch area.

The protesters have blocked Waterloo Bridge, one of the main passages across River Thames, as well as Marble Arch and Oxford Circus areas in central London.

Similar protests are being reported in various other cities across the U.K., including Glasgow and Nottingham.

Meanwhile, the Extinction Rebellion, a grassroots activist movement organizing the protests, said in a statement that they would disrupt London’s rail and metro services on Wednesday.

They said they plan to continue the protests throughout the week.

The protesters are demanding the government to declare a state of "climate emergency" and ask for reforms "to address climate change as an educational priority".

Keywords:
London Climate Protests
Your comment has been forwarded to the administrator for approval.×
Warning! Will constitute a criminal offense, illegal, threatening, offensive, insulting and swearing, derogatory, defamatory, vulgar, pornographic, indecent, personality rights, damaging or similar nature in the nature of all kinds of financial content, legal, criminal and administrative responsibility for the content of the sender member / members are belong.
Related News