Leaders gather, thousands sing in rain in farewell to Mandela

U.S. President Barack Obama to Cuba's Raul Castro joined thousands of South Africans to honor Nelson Mandela on Tuesday in a memorial that will celebrate his gift for uniting enemies across political and racial divides. 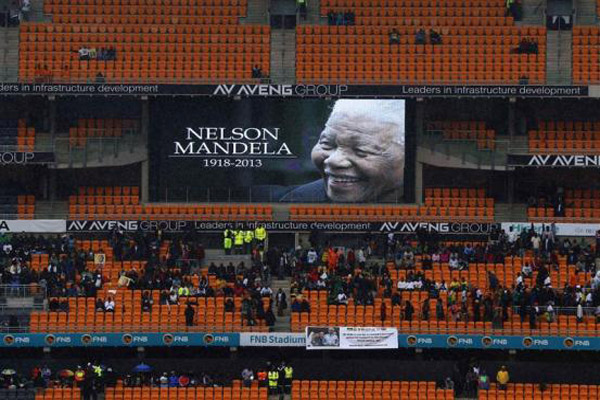 Obama and former president George W. Bush and their wives Michelle and Laura arrived from Pretoria's Waterkloof air base as singing, dancing South Africans made their way through heavy rain to Johannesburg's Soccer City where the homage to Mandela will be held. Obama and Castro, whose nations have been foes for more than half a century, are among the designated speakers at the stadium where 23 years earlier Mandela, newly freed from apartheid jail, was hailed by supporters as the hope of a new South Africa. Coinciding with U.N. Human Rights Day, the memorial in the 95,000-seat bowl-shaped stadium is the centerpiece of a week of mourning for the globally revered statesman, who died on Thursday aged 95. Since Mandela's death, Johannesburg has been blanketed in unseasonal cloud and rain - a sign, according to African tradition, of an esteemed elder passing on and being welcomed into the afterlife by his ancestors. Despite the weather, the atmosphere inside the stadium was one of joy and celebration, more akin to the opening game of the 2010 soccer World Cup that pitted jubilant hosts South Africa against Mexico. Flag-waving whites and blacks danced, blew "vuvuzela" plastic trumpets and sang anthems from the long struggle against apartheid. The packed carriages of commuter trains heading to the ground swayed side-to-side with the rhythm.

"I was here in 1990 when Mandela was freed and I am here again to say goodbye," said Beauty Pule, 51. "I am sure Mandela was proud of the South Africa he helped create. It's not perfect but no-one is perfect, and we have made great strides."

The service will pay tribute to a life of imprisonment and sometimes violent political struggle that ended in forgiveness and triumph, confirming Mandela as one of the towering figures of the 20th century.

The fact that the 90-odd visiting leaders include some from nations locked in antagonism adds resonance to the event, held at the site of Mandela's last public appearance, at the 2010 World Cup final.

Zimbabwean President Robert Mugabe and former British Prime Minister Tony Blair will both be there. Blair has called Mugabe a dictator who should have been removed from power. Mugabe has called Blair an imperialist and once told him to "go to hell".

Such passions will be laid to one side as the world pauses to remember a man with an astonishing ability to build bridges across seemingly implacable racial and ideological divides.

"What he did in life, that's what he's doing in death. He's bringing people together from all walks of life, from the different sides of opinion, political belief, religion," Zelda la Grange, Mandela's former personal assistant.