U.S. Secretary of State John Kerry on Tuesday urged the government of Syrian President Bashar Assad and its backers to work for a political transition as an August deadline approaches 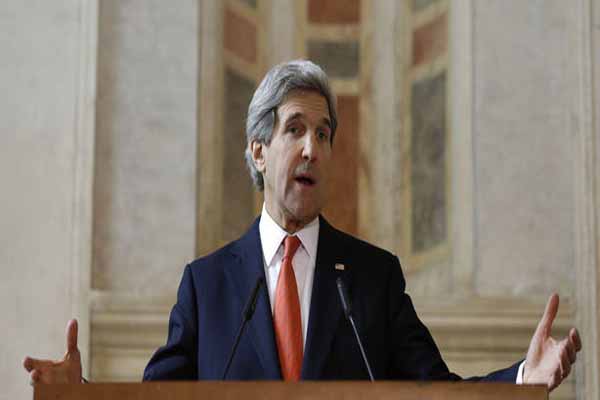 WASHINGTON (AVRUPA TIMES)-U.S. Secretary of State John Kerry on Tuesday urged the government of Syrian President Bashar Assad and its backers to work for a political transition as an August deadline approaches. “The target date for the transition is first of August,” Kerry said during a press briefing, referring to a deadline for the U.N.-led peace talks to end.

“So we’re now coming up to May. So either something happens in these next few months, or they are asking for a very different track.”

Saying that all sides to the problem had agreed that it was not possible to have a political transition with Assad as he lost “legitimacy,” Kerry stressed that if the transition did not happen, the war in Syria would only continue.

According to Kerry, the U.S. and Russia are currently working on details about the new cease-fire which would include Aleppo and prevent the city from falling.

“Right now, we are working hard to try to get this in place in a way that protects the integrity of Aleppo,” Kerry said.

The top U.S. diplomat also added that Russia and Iran – two supporters of the Assad regime -- were going to have to recognize “that they have embraced a transitional governing body.

“That is clearly what Geneva says. That is clearly what the 2254 resolution says. And if they're not prepared to follow up on it and quickly, this will not hold,” he said referring to the Geneva Communique and U.N. resolution 2254 -- two international documents describing the roadmap for Syria's political transition.

On Monday, Kerry said the short-term cessation of hostilities, that the U.S. and Russia had agreed to last week for Latakia and Ghouta worked well and that the team of both countries worked currently to expand the deal into Aleppo.

Kerry also warned Assad “very clearly” and “unequivocally” about increased violence in and around Aleppo and called on him to abide by the cease-fire deal between the U.S. and Russia.

“If Assad does not adhere to this, there will clearly be repercussions. And one of them may be the total destruction of the cease-fire and they go back to war,” he stressed.

Kerry was harsh on Assad not only because of his violations of the cessation of hostilities, but also over his acts specifically in and around Aleppo.

“If Assad's strategy is to somehow think he's going to just carve out Aleppo and carve out a section of the country, I've got news for you and for him,” he said. “This war doesn't end.”

Kerry noted that if Assad continued to fight in Syria, the opposition would do the same against Assad, which would cause a vicious circle.

“It is simply physically impossible for Assad to just carve out an area and pretend that he's somehow going to make it safe, while the underlying issues are unresolved in this war.

“Everybody at the table has said you can't end this as long as Assad continues, because Assad cannot reunite the country.”

During the weekend, Kerry was in Geneva for discussions with de Mistura.

The aim of the talks was to restore a partial truce in Syria while the clashes have increased recently in Aleppo.

Kerry also condemned Tuesday's hospital attack in Aleppo, which killed tens of civilians, saying the missile appeared to have been fired from a rebel-controlled territory.

Kerry added that the U.S. rejected "any" violence against civilians, whether conducted by Assad forces or the U.S.-backed opposition groups.