Egyptian army Marwan claimed Israel was behind the coup done by Sisi, saying only aim of Sisi and his friends was to protect Israel 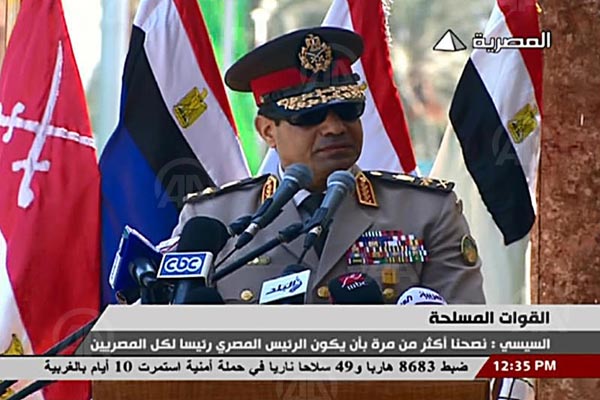 A retired General of the Egyptian army Sulejman Abu Marwan claimed that Israel was behind the coup done by Egypt's Abdel Fattah al-Sisi, saying only aim of Sisi and his friends was to protect Israel. Speaking in Turkey's northwestern Sakarya city, Marwan told AA in an exclusive interview that Sisi was announced as 'hero' in Israel after the coup. Marwan stated that the coup doers used the liberals and seculars of Egypt, having created the opportunity for coup and added that Israel announced Sisi as 'hero'.  "When we look at the news, the country behind Sisi gets revealed. They blame Morsi to have communication with Hamas. Israel makes the accusation. For the first time, someone is accused for being related to Hamas. People are judged on account of the fact that Israel and Egypt relations worsened, however this accusation is an honour," Marwan said. "The incidents that Egypt lives now, what Sisi did, have not taken place even during the French occupation. Military coup fired the big mosques and locked the other ones. That is a tyranny, that was even not lived during the French occupation."   Mohamed Morsi, Egypt's first democratically elected president, was ousted by the army under an army roadmap on July 3. Thousands of his supporters have since taken to the streets to demand his return to power.