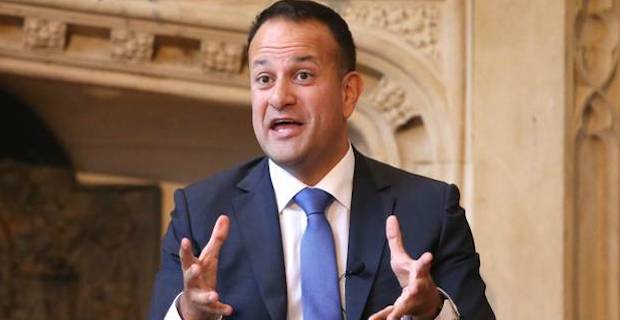 The agreement reached by U.K. and EU officials Monday night is “positive,” according to Irish Prime Minister Leo Varadkar.

Speaking at a press conference in Dublin on Tuesday, Varadkar said he hoped the Brexit deal is approved by the British MPs in a crucial vote set for this evening.

Varadkar said the agreement “does not undermine the backstop.”

“I hope and trust that the withdrawal agreement will now be endorsed by the House of Commons,” he said.

The Irish premier said the documents published on Monday night were an “unambiguous statement from both parties.”

The agreement “does not reopen the withdrawal agreement or undermine the backstop” -- meant to avoid the return of a "hard" border on the island of Ireland -- he added.

Brexit "has been a dark cloud over us for many months," but a positive vote in the U.K. parliament could restore confidence, he said.

"The further agreement yesterday provided additional clarity, reassurance and guarantees sought by some to eliminate doubt or fears, however unreal, that the goal was to trap the U.K. indefinitely in the backstop,” Varadkar added.

The U.K. and EU have agreed to “legally binding changes” to the EU withdrawal agreement and the political declaration, British Prime Minister Theresa May said Monday night.

“There was a clear concern in parliament over one issue in particular: the Northern Ireland backstop,” May told a joint news conference with European Commission President Jean-Claude Juncker following a meeting in the French city of Strasbourg.

“Having an insurance policy to guarantee that there will never be a hard border in Northern Ireland is absolutely right,” as it would honor Britain’s “solemn commitments” in the 1998 Belfast Agreement, she said

“But if we ever have to use that insurance policy, it cannot become a permanent arrangement and it is not the template for our future relationship,” she added.

Underlining that her deal, which saw a historic defeat in January, had needed legally binding changes, May said: “Today we have secured legal changes.”

May’s statement came just before a second “meaningful vote” is due Tuesday in the House of Commons.

“Now is the time to come together, to back this improved Brexit deal, and to deliver on the instruction of the British people,” she urged members of the House of Commons.

Juncker said he believed “it is high time to complete the withdrawal process in line with the wishes expressed by the government of the U.K. and to move on as swiftly as possible to the negotiation of our future partnership.”

He stressed that the U.K. had a second chance for requests for changes to the agreement but there will be no third time.

He urged the British parliament to ratify the deal.

Britain’s parliament will vote on May’s deal today and the political declaration, as well as the three new documents unveiled Monday night.

If parliament passes the deal this time around, the U.K. will leave the EU on March 29 with that deal.

If the deal is voted down again, on the two days following lawmakers are expected to debate and vote on two amendments.

MPs will vote on whether to leave without a deal.

If they vote to leave with no deal, the U.K. will leave the EU on March 29, and with no deal in effect, it is unclear what will happen in the immediate aftermath.

But if the lawmakers decide against leaving the EU without a deal, another vote will be held on Thursday, March 14.

Parliament will vote on whether the country needs more time for an orderly exit.

If MPs agree to extend Article 50 and therefore the negotiation process, talks will be extended for a period of time subject to agreement with the EU.

Keywords:
Irish PremierLeo VaradkarEU Agreement
Your comment has been forwarded to the administrator for approval.×
Warning! Will constitute a criminal offense, illegal, threatening, offensive, insulting and swearing, derogatory, defamatory, vulgar, pornographic, indecent, personality rights, damaging or similar nature in the nature of all kinds of financial content, legal, criminal and administrative responsibility for the content of the sender member / members are belong.
Related News