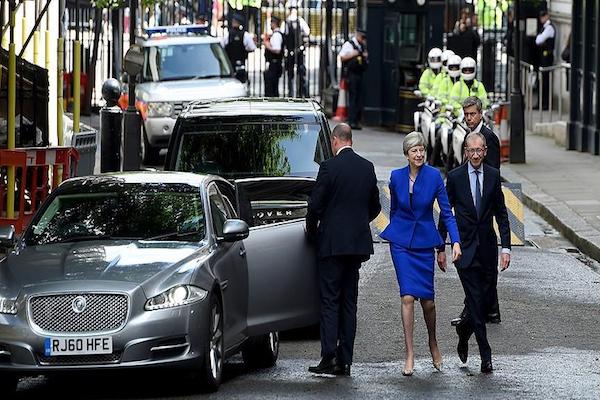 According to the Belfast Agreement, which largely ended decades of violence between Irish Catholic nationalists and pro-British Protestant unionists, the government in London must maintain a neutral stance between the opposing sides. However, after losing its parliamentary majority in last Thursday’s general election, the Conservative Party is now in talks for a so-called confidence and supply deal to act as a minority government backed by Northern Ireland’s DUP. The northern leader of the DUP’s Sinn Fein opponents, Michelle O’Neill, recently said any deal between the Conservatives and the DUP will not last. “This new arrangement between the DUP and the Tories will be transitory and will end in tears,” she said during a speech in Londonderry, Northern Ireland’s second city. “But it will be the people of the north who will have to pay the price for the DUP's support for Brexit and for cuts.” Sinn Fein returned seven lawmakers in Thursday’s general election but the party, because of its belief in a united Ireland, has never taken its seats in Westminster. Party President Gerry Adams claimed a referendum on uniting the U.K. region with the Republic of Ireland is now “inevitable”. "One thing we can say for certainty; there is going to be a referendum on Irish unity,” he added.

The 1998 multiparty deal stipulated there would be “rigorous impartiality” from London on any disputes in Northern Ireland. However, the DUP’s nascent deal with the Conservatives has prompted concerns over how the central U.K. government will be able to act as an honest broker in an administration propped up by 10 unionist lawmakers. Northern Ireland is dominated by two main parties, the DUP and Sinn Fein. Both parties wiped out smaller rivals on Thursday, reflecting increasing polarization between Northern Ireland’s two communities. The local power-sharing administration collapsed earlier this year amid a Sinn Fein walkout caused by a multi-million-pound energy-scheme scandal and repeated clashes with the DUP over recognition of the Irish language, Troubles legacy issues and other disagreements. A snap Northern Ireland election in March was ordered by the U.K.’s Northern Ireland Secretary James Brokenshire and saw Sinn Fein and the DUP returned as the largest parties from their respective communities. The U.K. government has said June 29 is the deadline for finalizing talks to form a new Northern Ireland administration. Discussions will resume on Monday with representatives of the five main local parties. Meanwhile, outgoing Irish Taoiseach (prime minister) Enda Kenny called Prime Minister Theresa May on Sunday, seeking assurances that “nothing should happen to put the Good Friday Agreement at risk”. May and Kenny had “confirmed their joint commitment to restoring the Northern Ireland executive as soon as possible,” a U.K. government spokesman said. “The prime minister reiterated that the government's approach and objectives in the forthcoming talks to re-establish the Northern Ireland executive remained unchanged,” the statement added.