Germany unmoved by US threats to withdraw troops 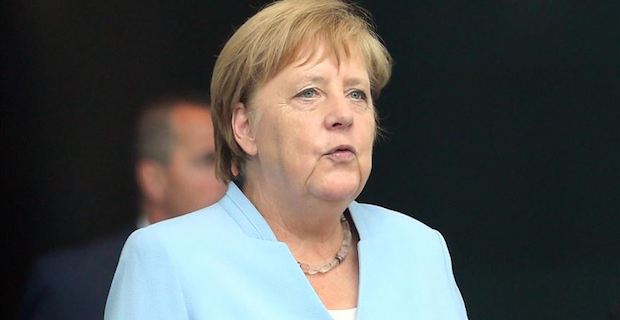 Chancellor Angela Merkel on Wednesday reiterated her long-held position on defense spending, despite recent Trump administration threats to pull U.S. troops out of Germany and move them to Poland.

Speaking at a news conference, Merkel said Germany would continue to gradually increase its defense spending with the goal of meeting the NATO target, and argued that the U.S. has good reasons for having its troops stationed in Germany.

“I believe that the stationing locations in Germany are also good locations for the American soldiers,” Merkel stressed, adding that big investments were made for these military bases.

“There are good reasons for the stationing locations in Germany and at the same time we know that we must continue our efforts to make our armed forces [Bundeswehr] stronger,” she said.

Her remarks came after senior U.S. officials suggested last week American troops could be relocated from Germany to Poland due to Berlin’s failure to meet the NATO goal of spending 2% of national output for defense.

“Poland meets its 2% of GDP spending obligation towards NATO. Germany does not. We would welcome American troops in Germany to come to Poland,” Georgette Mosbacher, the U.S. ambassador to Warsaw, said on Twitter.

Richard Grenell, the U.S. ambassador to Berlin, told local media last week that it was “offensive” to expect that the U.S. taxpayer will continue to pay for more than 50,000 American soldiers stationed in Germany, while “Germans use their trade surplus for domestic purposes.”

U.S. President Donald Trump has repeatedly criticized Germany for not increasing its defense spending and instead relying on U.S. support for its “protection from Russia.”

The EU’s largest economy, Germany is currently spending 1.36% of its GDP on defense, despite its earlier commitment to a NATO target of 2%.

Merkel’s conservative-left coalition government insisted that it would gradually increase its military spending to 1.5% of national output by 2024.

Keywords:
Chancellor Angela MerkelGermany
Your comment has been forwarded to the administrator for approval.×
Warning! Will constitute a criminal offense, illegal, threatening, offensive, insulting and swearing, derogatory, defamatory, vulgar, pornographic, indecent, personality rights, damaging or similar nature in the nature of all kinds of financial content, legal, criminal and administrative responsibility for the content of the sender member / members are belong.
Related News