Fuat Oktay, Ankara will continue to stand by Turkish Cypriots 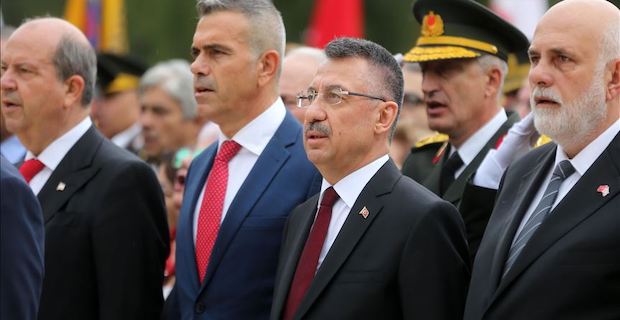 Turkey’s vice president on Friday attended the official ceremony held in the Turkish Republic of Northern Cyprus (TRNC) to mark its 36th foundation anniversary. During the ceremony, the participants observed a minute of silence. Fuat Oktay, together with TRNC President Mustafa Akinci, laid a wreath at the Lefkosa Ataturk monument.

Then, as part of a tradition, Oktay signed the record book at the monument and wrote that TRNC was founded as a result of the resolute stance of Turkish Cypriots and Turkey was proud to mark the foundation of the country.

“TRNC grows stronger with development,” he wrote, adding the country made progress by advancing side by side with Turkey.

Oktay noted that Turkey would continue to stand by “brotherly” Turkish Cypriots.

The organization was largely attended by officials from Turkey and TRNC, including the latter’s president, prime minister, parliament speaker, former’s parliament speaker and lawmakers from ruling and opposition parties.

TRNC was established on Nov. 15, 1983, almost a decade after Turkey’s Cyprus Peace Operation on the island, which stopped persecution and violence against Turkish Cypriots by ultra-nationalist Greek Cypriots.

Keywords:
Turkish Republic Of Northern CyprusTurkish Cypriots
Your comment has been forwarded to the administrator for approval.×
Warning! Will constitute a criminal offense, illegal, threatening, offensive, insulting and swearing, derogatory, defamatory, vulgar, pornographic, indecent, personality rights, damaging or similar nature in the nature of all kinds of financial content, legal, criminal and administrative responsibility for the content of the sender member / members are belong.
Related News