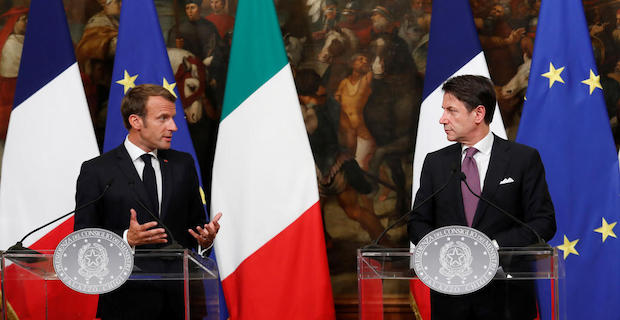 French President Emmanuel Macron met with Italian Prime Minister Giuseppe Conte in Rome on Wednesday. The two leaders focused primarily on migration and also spoke about the conflict in Libya. Conte said at a joint press conference after the meeting that Europe should manage the migration phenomenon in a practical and concrete way.  "It's essential for the EU to turn a new page in the direction of the structural management and no longer emergency management of the flows,” he added. Conte also said migration must no longer be a theme of anti-European propaganda.

Macron said he understands the injustice and misunderstanding Italy has been facing on migration since 2015.

He said the EU has not shown enough solidarity with countries handling first arrivals of migrants, notably Italy.

"France is ready to develop this in the framework of overhauling the Dublin accords," said Macron.

“I am convinced we can agree on an automatic redistribution system under the auspices of the European Commission.”

He said EU member states that do not take part in the new distribution system would be “punished financially," pointing to Conte's remarks last week in Brussels.

The two leaders also agreed to work together on the Libya crisis, Conte said.

Keywords:
Emmanuel MacronFrenchItalian LeadersGiuseppe Conte
Your comment has been forwarded to the administrator for approval.×
Warning! Will constitute a criminal offense, illegal, threatening, offensive, insulting and swearing, derogatory, defamatory, vulgar, pornographic, indecent, personality rights, damaging or similar nature in the nature of all kinds of financial content, legal, criminal and administrative responsibility for the content of the sender member / members are belong.
Related News