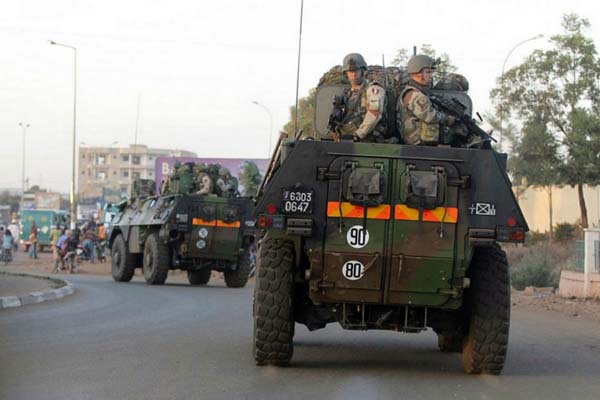 France will cut nearly 34,000 military personnel under a proposed six-year defence budget to be unveiled on Friday, as government belt-tightening and a desire for more nimble forces alters the makeup of Europe's second-largest army. Defence Minister Jean-Yves Le Drian will present the 190 billion euro ($251 billion) budget in a cabinet meeting. The defence ministry warned in April that its budget would remain largely static in coming years when it outlined its 2014-19 priorities in a strategic blueprint that anticipated the 12 percent cut in staff. The government wants to cut state spending by 60 billion euros over its five-year term to meet deficit targets but steered clear of drastic cuts to military spending after armed forces officials and lawmakers said that would hamper France's ability to react to global security threats. Still, the military job cuts will bite at a time of rising unemployment and dissatisfaction over Socialist President Francois Hollande's inability to revive the sputtering economy.

Under the draft budget, the military will also slow the pace at which it takes delivery of Rafale jets ordered from Dassault Aviation, only taking 26 of the planes over the six years, down from a normal pace of some 11 planes a year.

The move will delay promised payments of the planes, worth roughly $120 million a piece, easing pressure on state coffers.

The government hopes foreign orders from India and elsewhere will snap up some of the planes being rolled out by partly state-owned Dassault, which has yet to sell a single of its flagship Rafales abroad but says it has to produce at least 11 a year to operate efficiently.

The proposed budget is slightly above the 179 billion euro figure the April blueprint had indicated, after being boosted by real estate sales and other one-off benefits.

It will be debated in the months ahead in parliament, where the ruling Socialists have a slim majority, and is largely expected to be voted into law by year-end.

The military, which has sustained repeated budget cuts in recent years, is focused on overhauling the armed forces to create a more mobile army still capable of operating in two or three different theatres at the same time.

France's engagement in Mali this year, which drove back Islamist rebels, has underscored the need for robust intelligence resources and special forces.

The six-year draft budget calls for the elimination of 23,500 posts, 16,000 of which are administrative positions. The other 10,000 staff cuts were mandated under the previous budget.

France's military employs some 228,000 personnel today. A further 165,000 individuals are employed by the defence industry, not including sub-contractors.