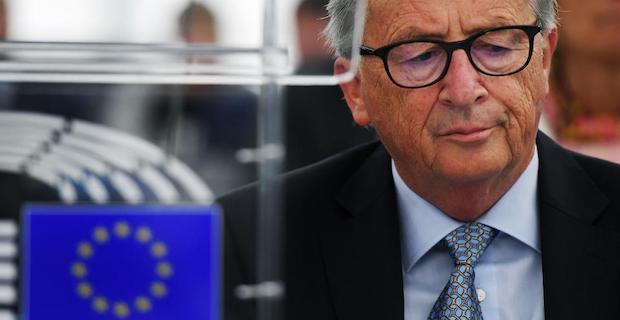 There is a "palpable" risk of a no-deal Brexit, European Commission President Jean-Claude Juncker said on Wednesday.

Juncker said "the risk of a no-deal remains real," in a statement as he updated the European Parliament about his meeting with British Prime Minister Boris Johnson earlier this week.

He also stressed that the Irish backstop could not be made to reach a deal until Britain submitted written proposals on alternative arrangements.

"You will hardly be surprised to learn that the prime minister assured us that he wanted an agreement," he told the MEPs.

Describing talks with Johnson as "friendly, constructive and in part positive", Juncker said the European Commission "is prepared to work day in day out, morning until night -- with a few breaks -- to try to find the technical and political solutions we need but I am not sure that we will get there."

"There is very little time remaining but what I do know is that we have to keep trying," he said, adding: "I said to Prime Minister Johnson that I have no emotional attachment to the safety net, to the backstop, but I stated that I stand by the objectives that it is designed to achieve".

"That is why I called on the prime minister to come forward with operational proposals, in writing, for practical steps which would allow us to achieve those objectives," Juncker said.

"Until such time as those proposals have been presented, I will not be able to tell you, looking you straight in the eye, that any real progress has been achieved," he added.

Also speaking at the Parliament, the EU’s chief negotiator Michel Barnier said that the bloc still needed to hear more from the U.K. side about the proposals that would replace backstop.

"I would recommend nobody underestimates the consequences of no-deal for U.K. first and foremost, but for us as well," Barnier said.

"It is a long road but we want to create the conditions which are necessary for confidence to build our future relationship as outlined in the political declaration," he added.

Meeting with the EU officials in Luxembourg earlier this week, Johnson reiterated his position that the U.K. would leave the union on Oct. 31 with or without a deal.

Johnson has said he would not request for a new extension from the EU, despite a new act by the House of Commons, which blocks a departure from the EU without an agreement.

Keywords:
BrexitEuropean Commission President
Your comment has been forwarded to the administrator for approval.×
Warning! Will constitute a criminal offense, illegal, threatening, offensive, insulting and swearing, derogatory, defamatory, vulgar, pornographic, indecent, personality rights, damaging or similar nature in the nature of all kinds of financial content, legal, criminal and administrative responsibility for the content of the sender member / members are belong.
Related News