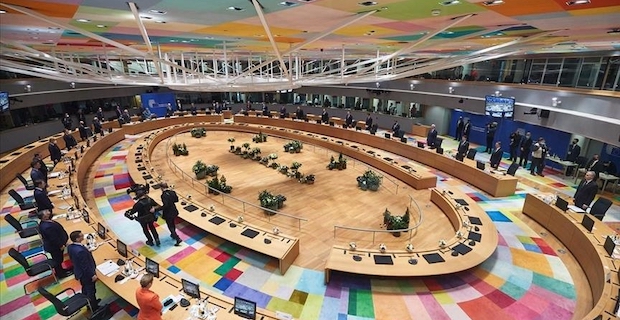 European Union leaders will discuss the coronavirus pandemic, vaccine deliveries, and the delicate state of relations with both Turkey and Russia in a virtual two-day summit starting Thursday.

US President Joe Biden will also attend the meeting to discuss transatlantic cooperation with EU leaders.

The summit, originally planned to be held face-to face, will start on Thursday afternoon.

The leaders will discuss the continuing COVID-19 pandemic – now over a year old – including how to speed up vaccine production and deliveries among EU member states, as well as technical issues with vaccine travel certificates planned to be introduced by this summer.

Foreign policy will be another hot topic on the agenda, and relations with Turkey especially vis-à-vis the Eastern Mediterranean will loom large.

“In relation to the Eastern Mediterranean, we will consider, with a view to our meeting in June, stepping up our engagement with Turkey in a phased, conditional and reversible manner,” said EU Council President Charles Michel in a letter to EU leaders.

Turkey and Greece have sparred over disputed maritime boundaries in the Eastern Mediterranean. Turkey has stressed negotiations towards fair sharing and a win-win agreement, while decrying Athens’ efforts to turn a bilateral issue into one between Turkey and the EU.

A report prepared by EU foreign policy chief Josep Borrell on relations with Turkey is also expected to be presented to the leaders. A leaked version of the letter praises Turkey's recent “positive steps” and “calmer, more constructive attitude” on issues such as the Eastern Mediterranean.

The document also suggests deepening “the present momentum and incentivize closer EU-Turkey ties across the board" with modernization of the 25-year-old Customs Union as well as greater Turkey involvement in EU-financed research and youth programs such as Horizon Europe and Erasmus+.

Ankara has long pressed for modernization of the EU-Turkey Customs Union, saying a new deal would benefit both sides.

At the summit, EU leaders are expected to give the European Commission a mandate to start negotiations on the renewal of the 2016 EU-Turkey deal designed to stop the irregular refugee flows and improve the conditions of Syrian refugees in Turkey.

Last week, Borrell said it was necessary to strike a new deal because the 2016 agreement had “produced tangible results” and “led to a significant decrease of loss of human lives, a reduction in irregular crossing and improved the situation of refugees and migrants in Turkey.”

Turkey also favors renewing the deal. However, it has complained that while it upheld its end of the pact, the EU did not, including not fully providing €6 billion ($7.1 billion) in aid and breaking pledges on visa liberalization.

Turkey hosts some 3.7 million Syrian refugees, more than any other country in the world.

Additionally, amid steps towards warmer ties with the EU, Turkish leaders have expressed impatience with a lack of concrete steps by the bloc for better relations.

As part of the 2016 deal, the EU had promised to enhance political and economic cooperation with Ankara, by accelerating Turkey’s EU membership talks, modernizing the EU-Turkey Customs Union and allowing visa-free travel for Turkish nationals within the Schengen area.

If the summit fails to produce such concrete steps, this carries the risk of irritating Turkish-EU ties and slowing the momentum towards improved ties.

US President Biden will also attend the leaders’ meeting on Thursday evening to discuss transatlantic relations.

Relations with Russia are also on the agenda and expected to be discussed with Biden.

The topic comes up amid new stress in Russian ties with the West. Already under strain due to Russia’s illegal 2014 annexation of Crimea – which Turkey also condemns – the alleged poisoning of opposition figure Alexey Navalny and his prison sentence this February added new friction.

Unlike his predecessor Donald Trump, who enjoyed cozy relations with Russian President Vladimir Putin, Biden has taken a markedly aggressive attitude with Moscow, suggesting a unified transatlantic front on Russia for the first time in years.

“As regards Russia, I propose to have an information point and will share with you the outcome of my latest contacts with President Putin in advance of a more strategic debate on the matter at our next physical European Council meeting,” Michel also told EU leaders in his letter.

On Friday morning, before the close of the meeting, the leaders will also discuss economic and digital issues.

Keywords:
Joe BidenTurkeyEuropean UnionEUCOVID-19
Your comment has been forwarded to the administrator for approval.×
Warning! Will constitute a criminal offense, illegal, threatening, offensive, insulting and swearing, derogatory, defamatory, vulgar, pornographic, indecent, personality rights, damaging or similar nature in the nature of all kinds of financial content, legal, criminal and administrative responsibility for the content of the sender member / members are belong.
Related News