Trumpp and Erdoğan agreed to fight against terror 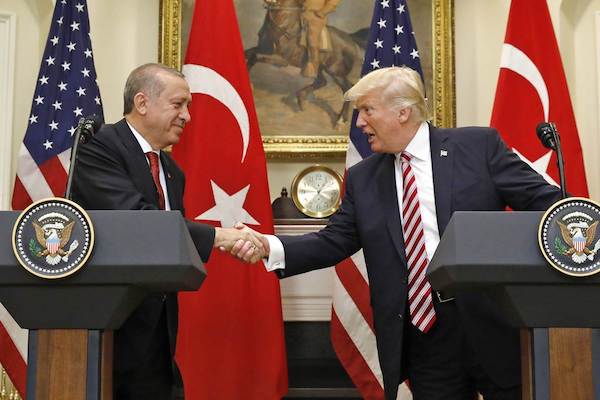 "We are committed to fighting all kinds of terrorism, without any discrimination whatsoever, that impose a clear and present threat upon our future," Erdogan said. "There is no place for terrorist organizations in the future of our region," the president said. Engaging PYD and YPG as partners, "no matter which country does it, certainly does not fall in line with the global agreement that has been reached" on terrorism, according to the Turkish leader. Ankara views the PYD and its armed wing YPG as the Syrian offshoots of the terrorist PKK organization. The Pentagon said last week the U.S. would begin directly arming the YPG. Erdogan also stressed Turkey's efforts against the Fetullah Terrorist Organization (FETO) that Ankara accuses of mounting a defeated coup attempt last summer. The Turkish government is seeking FETO leader Fetullah Gulen's extradition from the U.S. "I have been very frankly communicating our expectations with regards to Fetullah Terrorist Organization which we have notified our friends of their involvement in the failed coup of July 15 in Turkey," Erdogan said. During the news conference, Trump voiced support for Ankara in its fight against Daesh and the PKK, saying the U.S. would work to ensure that terror groups “have no safe quarter. “The Turkish people have faced horrible terrorist attacks in recent years, and even recently,” he said. “The relationship that we have together will be unbeatable,” Trump said of joint anti-terror efforts. He also voiced appreciation for Turkey’s leadership “in seeking an end to the horrific killing in Syria”. Among the issues the men will discuss are a mutual effort to “reinvigorate our trade and commercial ties”, Trump said. The meeting comes amid strong disagreements between the U.S. and Turkey regarding Washington's support for the YPG to combat Daesh in northern Syria, as Turkey's view of the PYD/YPG is not shared by Washington. Prior to the meeting, Trump said the discussions would be “long and hard” but fruitful. “We've had a great relationship and we will make it even better," he said.