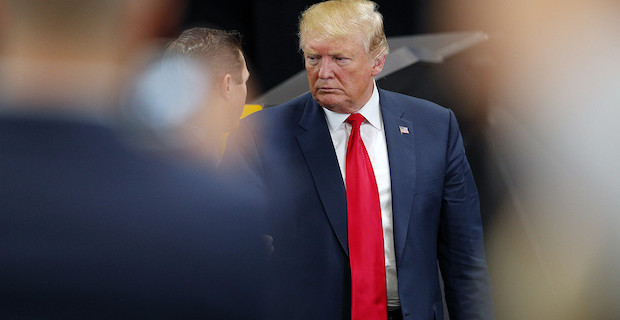 President Donald Trump vetoed a resolution Tuesday that called for the U.S. to end support for the Saudi-led war in Yemen.  "This resolution is an unnecessary, dangerous attempt to weaken my constitutional authorities, endangering the lives of American citizens and brave service members, both today and in the future," Trump said in a statement. The move was the second veto of Trump’s presidency. The legislation was originally introduced in the Senate and co-sponsored by presidential candidate Senator Bernie Sanders, invoking the War Powers resolution, a federal law that gives Congress the power to check the president when committing the U.S. to an armed conflict. The House passed a similar resolution on Yemen in February, but it was not able to reach the Senate due to a procedural issue.

On Twitter, Sanders said he was "disappointed, but not surprised" at the veto.

"The people of Yemen desperately need humanitarian help, not more bombs. I am disappointed, but not surprised, that Trump has rejected the bi-partisan resolution to end U.S. involvement in the horrific war in Yemen," Sanders tweeted.

"From a president elected on the promise of putting a stop to our endless wars, this veto is a painful missed opportunity," said Rep. Ro Khanna.

Khanna called the resolution a major win, saying "It sends a clear signal to the Saudis that they need to lift their blockade and allow humanitarian assistance into Yemen if they care about their relationship with Congress."

Saudi Arabia has been leading a coalition against Yemen's Houthi rebels since 2015, when Riyadh and its Sunni-Arab allies launched a massive air campaign aimed at rolling back Houthi gains that began in 2014.

The campaign has devastated Yemen’s infrastructure, including its health and sanitation systems, prompting the UN to describe it as one of the worst humanitarian disasters of modern times.

The bill also served as a sharp criticism of the Trump administration's stance on the murder of journalist Jamal Khashoggi, who was killed shortly after he entered the Saudi Consulate in Istanbul on Oct. 2 last year.

Saudi Arabia initially denied any knowledge of his whereabouts but following a rising number of contradictions in its narrative sought to blame the journalist's death on a botched rendition operation being carried out by rogue agents.

That explanation fell flat for many, including congressional leaders, who insist Khashoggi's high-profile murder could not have been carried out without Saudi Crown Prince Mohammed bin Salman's blessing, especially after the CIA reportedly determined with high confidence in November that bin Salman ordered the killing.

Keywords:
Donald TrumpSaudi Arabia
Your comment has been forwarded to the administrator for approval.×
Warning! Will constitute a criminal offense, illegal, threatening, offensive, insulting and swearing, derogatory, defamatory, vulgar, pornographic, indecent, personality rights, damaging or similar nature in the nature of all kinds of financial content, legal, criminal and administrative responsibility for the content of the sender member / members are belong.
Related News