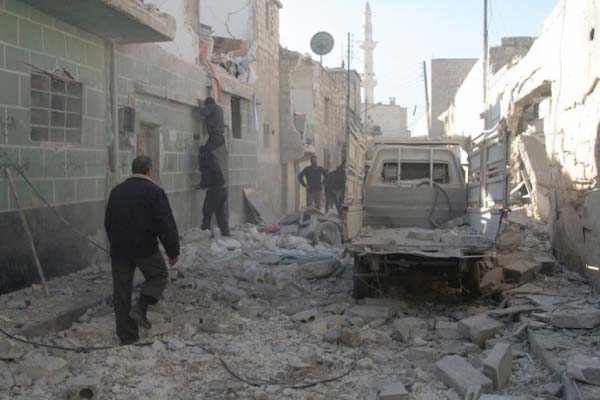 Forty-two people were wounded in the attacks targeting civilian areas in Azaz, Sukkeriah and Salihin districts.

Another 70 people died and 140 were wounded during Sunday's barrel bomb attacks on residential areas in Aleppo.

According to local sources, Syrian army forces dropped 165 barrel bombs on the northern city killing more than 500 people within a week.

British Foreign Secretary William Hague said on Monday that he was concerned over escalating violence in Syria and the deepening humanitarian crisis.

A statement released from the UK Foreign Office (FCO) underscored the reports of barrel bombs being dropped on Aleppo for over a week leaving more than 300 people dead, and stressed that many of those killed were children.

In the same statement, William Hague said that he was deeply concerned at the escalating level of violence in Syria and added: "I condemn the use of brutal and indiscriminate weapons in densely-populated civilian areas, such as we have seen in Aleppo in recent days."

"I reaffirm our support for the National Coalition, and UK efforts to support the UN's Geneva II political process starting in January," Hague highlighted, saying that this was the only way to end the conflict, and to ensure that Assad has no role in Syria's future.