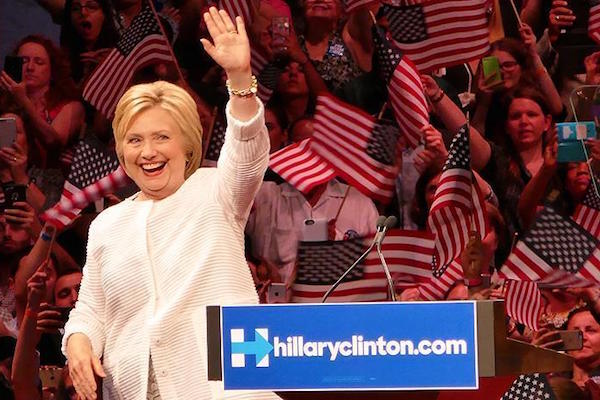 “Our founding fathers embraced the enduring truth that we are stronger together,” she said at the Wells Fargo Center in Philadelphia, Pennsylvania.

“Now America is once again at a moment of reckoning – powerful forces are threatening to pull us apart. Bonds of trust and respect are fraying, and just as with our founders, there are no guarantees. It truly is up to us,” she added, saying that her rival, Republican nominee Donald Trump “wants us to fear the future, and fear each other.”

During a speech marked by boisterous applause she accepted the nomination "with humility, determination and boundless confidence in America's promise" as the convention hall erupted in a jubilant outpouring.

She painted Trump as her opposite: inexperienced and ultimately untrustworthy.

"Imagine him in the Oval Office facing a real crisis," she said. "A man you can bait with a tweet is not a man we can trust with nuclear weapons."

Clinton is the first woman to ever lead one of America’s major political parties in the race for the White House, and she emphasized that her candidacy is a major milestone for women everywhere.

"Let's keep going, until every one of the 161 million women and girls across America has the opportunity she deserves. Because even more important than the history we make tonight, is the history we will write together in the years ahead," she said.

Prior to Clinton, a parade of celebrities, law enforcement and former defense officials spoke in support of the former top diplomat.

During a fiery speech, President Barack Obama’s former envoy to the counter-Daesh coalition made an impassioned plea, casting Clinton as an expert stateswoman as he riled up the crowd.

“With Hillary Clinton as our commander-in-chief the United States will continue to be that indispensable, transformational power in the world,” Gen. John Allen said. “To our allies, and to our friends and partners, listen closely, we are with you. America will not abandon you.”

He was likely referring to Trump’s controversial statements in which he has claimed that if he is president he will not come to the aid of NATO countries who do not pay their fair share on defense.

"Donald Trump consistently smears the character of Muslims. He disrespects other minorities, women, judges, even his own party leadership,” he said.

“He vows to build walls and ban us from this country. Donald Trump, you are asking Americans to trust you with our future. Let me ask you: Have you even read the U.S. Constitution? I will gladly lend you my copy," he added with his copy in hand.

Amid laughter, he added, “I said that because I know that Donald Trump couldn't tell the difference."

Clinton is now headed into an incredibly tight race against Trump where major battleground states, including Pennsylvania, Ohio and Virginia, will be pivotal to either candidate’s success.