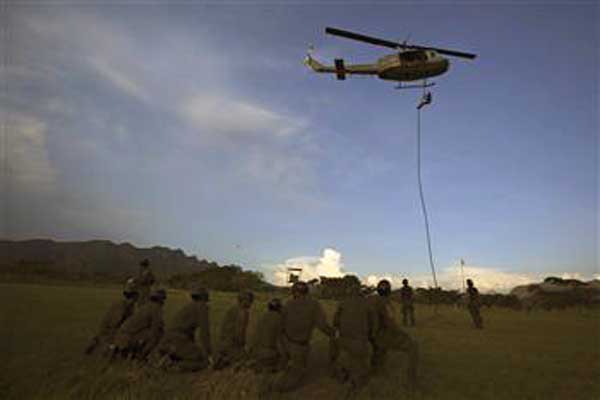 The National Security Agency has also provided “substantial eavesdropping help” to the Colombian government, according to the daily. And the U.S. provided Colombia with GPS equipment that can be used to transform regular munitions into “smart bombs” that can accurately home in on specific targets, even if they are located in dense jungles.

In March 2008, Colombian forces killed a top FARC commander, Raul Reyes, in one of several jungle camps the militants operated in Ecuador, just across the border. The report said Colombia used U.S.-made smart bombs in the operation.

It is based on interviews with more than 30 former and current U.S. and Colombian officials, who the daily said spoke on condition of anonymity because the program is classified and ongoing. The CIA would not comment on the Post report. Without going into detail, Colombian President Juan Manuel Santos told the daily that the CIA has been “of help,” providing Colombian forces with “better training and knowledge.”

The multibillion-dollar program was funded secretly and separately from $9 billion in aid that the U.S. has openly provided to Colombia, mostly in military assistance. It was authorized by President George W. Bush and has continued under President Barack Obama, the newspaper reported.

Colombia’s government and FARC have been engaged in peace talks in Havana since late 2012, but there has been no ceasefire between the two sides. The FARC rebels took up arms in 1964. The U.S.-backed military buildup has reduced FARC’s ranks to about 9,000 fighters and killed several top commanders, though the rebels insist they are still a potent force.