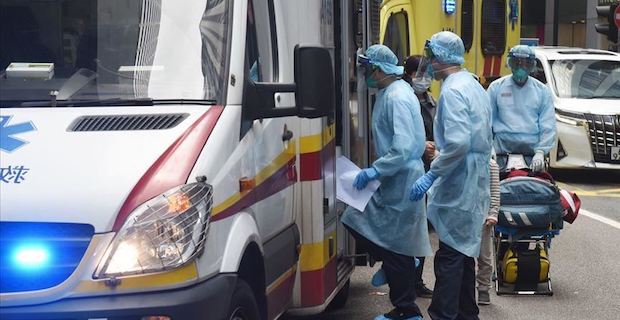 At least 26 people have died in the coronavirus outbreak in mainland China, with most cases recorded in the central Hubei province, local media reported Friday.
The symptoms of the mystery virus resemble those of pneumonia causing massive outcry in China as the country prepares to hold New Year celebrations on Saturday.

At least 24 patients died in Hubei province, while one death was reported from China's northeastern Hebei province.

The virus originated in Wuhan city -- the capital of Hubei -- and has now spread across 29 provinces in the country. At least 11 cases were reported in Japan, South Korea, Thailand, the U.S., Singapore and Vietnam.

Beijing has recorded 29 cases of the virus as of Friday.

Five confirmed cases of the new virus were reported in the autonomous regions of Hong Kong and Macao, as well as in Taiwan, which Beijing sees as a breakaway province.

The World Health Organization (WHO) held a meeting on the virus in Geneva on Thursday. However, it did not declare the outbreak as international emergency.

Chinese officials said they had investigated 9,507 cases of "close contacts" of patients, with 8,420 among them being under medical observation while 1,087 others were discharged.

Many airlines have suspended their flights to Wuhan due to fear of transmitting the virus to other areas, while Beijing has canceled large-scale activities in view of the New Year celebrations.

Wuhan shut down public transport to prevent further spread of the fatal virus.

The Spring Festival, or Chinese Lunar New Year, falls on Jan. 25 this year. The celebrations often feature temple fairs, sports and exhibitions, usually held in Beijing during the holiday.

Travelers from China are being screened at several airports across the world in the wake of a deadly viral outbreak. Turkey has decided to scan all passengers traveling from China with thermal cameras at airports.

Researchers have found a key protein essential for the coronavirus to infect humans, indicating that a possible natural reservoir of the virus may be bats.

Chinese investigators revealed that the virus was transmitted to humans through "wild animals."

The virus causes high fever, coughing and shortness of breath at the first stage, while in later stages it causes pneumonia, kidney failure and death.

Chinese health officials warned that the virus has the potential to mutate.

Li Bin, an official from the country's National Health Commission, informed that the coronavirus was transmitted via the respiratory tract.

"There is a possibility of viral mutation and further spread of the disease," he added.

Keywords:
ChinaVirus
Your comment has been forwarded to the administrator for approval.×
Warning! Will constitute a criminal offense, illegal, threatening, offensive, insulting and swearing, derogatory, defamatory, vulgar, pornographic, indecent, personality rights, damaging or similar nature in the nature of all kinds of financial content, legal, criminal and administrative responsibility for the content of the sender member / members are belong.
Related News