Turkish Foreign Minister Mevlüt Çavuşoğlu stated at the joint press conference with the Greek Foreign Minister Georgios Katrugalos in Antalya that Any energy project in the Eastern Mediterranean which excludes Turkey is not realistic. Turkey has rights originating from international law. 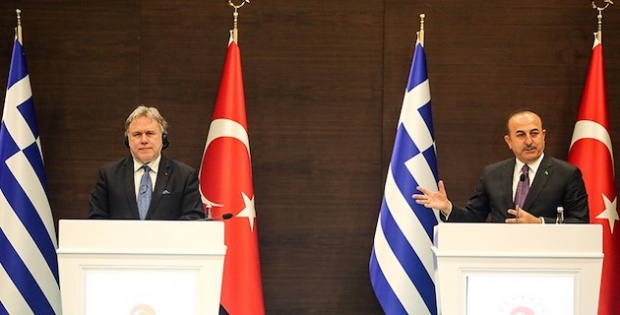 One of the top issues the two Ministers discussed was a recent ongoing hydro-carbon tension in the Eastern Mediterranean. Çavuşoğlu stressed ‘Turkey has rights to conduct activities to explore hydro-carbon reserves around Cyprus and in the Eastern Mediterranean originating from international law and apart from that the Turkish Cypriots also have their own rights around the island. Even the Greek Cypriot Side, Greece and the European Union are accepting this. We are not against the explorations however we had a very simple demand for securing the rights of the Turkish Cypriots. This guarantee can be provided through the European Union or other formulas can be found. We have shown possible flexibility on that.’

The Turkish Foreign Minister also underlined that this issue might have been resolved simply, nevertheless although Greek Cypriot Leader Anastasiades accepts that the Turkish Cypriot side has rights, he states that he cannot take any further steps to guarantee those rights. Turkey began its own explorations in the region after the Greek Cypriot government refused to secure the rights of the Turkish Cypriots and said, ‘We will start drilling operations in the coming period but recently there has been a proposal for the formation of a fund for the fair distribution of the revenues, we will also evaluate that’.

Minister Çavuşoğlu “Turkey will use its own rights in the continental shelf but it has also, as a guarantor country, the right to protect the rights of the TRNC. This authority arises from the international rights. Therefore, I want to underline that I do not agree with Georgios in this issue. Today, the issue of guarantee is not outdated. Why? We see unilateral drilling activities. Maybe, Turkey’s guarantee is more important than ever. We have seen at the negotiations continuing between the TRNC and the Greek Cypriot side that the Greek Cypriot side does not want to share their power with the Turkish Cypriots. In the same way, although Anastasiades accepted political equality before Crans Montana, he changed direction after Crans Montana. Adding that claiming that the agreement for guarantee and security is outdated is not a realistic approach, Çavuşoğlu said that they held a Crans Montana Conference which comprised all these issues. Indicating that Anastasiades took a step back at the Crans Montana Conference due to his own concerns so the conference became unsuccessful, Cavusoglu added that therefore it is a waste of time to start from the stage left after the failed conference. We are continuing our unofficial meetings to determine what and how we will negotiate and its framework as well. It is out of the question to resume the negotiations from the stage which was left at Crans Montana. We have been giving our constructive messages since Crans Montana.