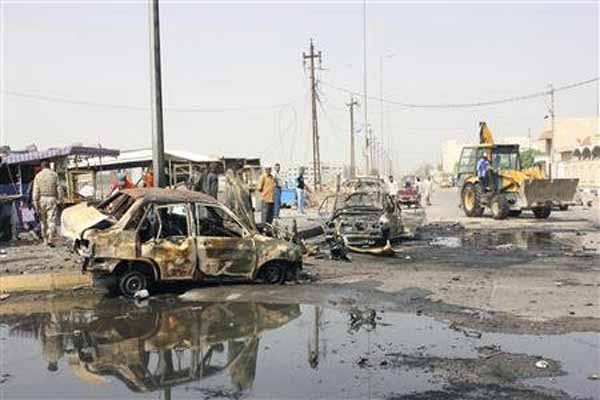 At least 43 people were killed in car bomb explosions targeting Shi'ite Muslims in the Iraqi capital and the southern oil hub of Basra on Monday, police and medics said. About 150 people have been killed in sectarian violence over the past week and tensions between Shi'ites, who now lead Iraq, and minority Sunni Muslims have reached their highest level since U.S. troops pulled out in December 2011. No group immediately claimed responsibility for the attacks. Nine people were killed in one of two car bomb explosions in Basra, a predominantly Shi'ite city 20 km (260 miles) southeast of Baghdad, police and medics said.

"I was on duty when a powerful blast shook the ground," said a police officer near the site of that attack in the Hayaniya neighbourhood.

"The blast hit a group of day labourers gathering near a sandwich kiosk," he told Reuters, describing corpses littering the ground. "One of the dead bodies was still grabbing a blood-soaked sandwich in his hand."

Five other people were killed in a second blast inside a bus terminal in Saad Square, also in Basra, police and medics said.

In Baghdad, a parked car exploded in a busy market in the mainly Shi'ite eastern district of Kamaliya, killing seven people, police said.

A further 22 people were killed in blasts in Ilaam, Diyala Bridge, al-Shurta, Shula and Sadr City - all areas with a high concentration of Shi'ites.

A deadly raid by the Iraqi army on a protest camp in the town of Hawija last month ignited a bout of violence that left more than 700 people dead in April, according to a U.N. count, the highest monthly toll in almost five years.

At the height of sectarian violence in 2006-07, the monthly death toll sometimes topped 3,000.