Two car bombs exploded in Baghdad on Sunday, killing at least 14 people, police and medics said, while a standoff in Falluja continued. 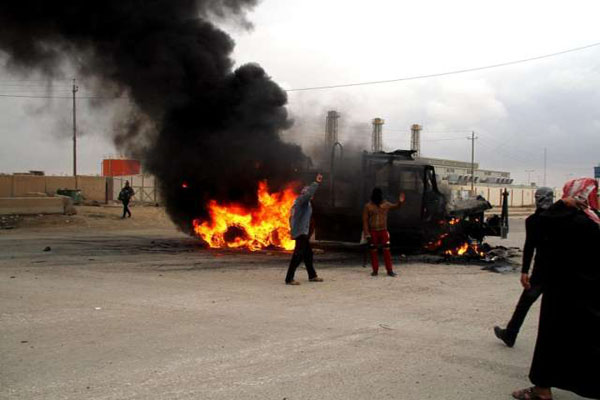 Two car bombs exploded in Baghdad on Sunday, killing at least 14 people, police and medics said, while a standoff in Falluja continued. Sunday's deadliest blast killed nine people outside a bus terminal in the Allawi district of the capital, near the site of a bombing four days ago at the small Muthanna airfield in which 23 army recruits were slain. A witness who did not give his name said the bus terminal bomb also targeted army recruits who were registering their names at the airfield. "When they left the airport and came and gathered here, the bomb went off," he said.

The government has asked for volunteers to join its military struggle.

On Jan. 1, militants seized Falluja and parts of the nearby city of Ramadi, the provincial capital of Anbar, raising the stakes in a confrontation with the Shi'ite-led government.

Prime Minister Nuri al-Maliki has deployed tanks and artillery around Falluja, but is allowing time for negotiations aimed at securing the peaceful eviction of the militants of  Islamic State of Iraq and the Levant (ISIL).

Residents of Falluja, 70 km (44 miles) west of Baghdad, said most shops in the city centre were open on Sunday, as people prepared for a holiday to mark the anniversary of the Prophet Mohammad's birthday.

Some families who had fled the city were returning, although many still feared a military offensive. Residents said the town of Khalidiya, which lies between Ramadi and Falluja, had come under army fire from mortars and helicopters.