British authorities investigate the murder of a soldier, who was hacked to death by two attackers on a busy London street 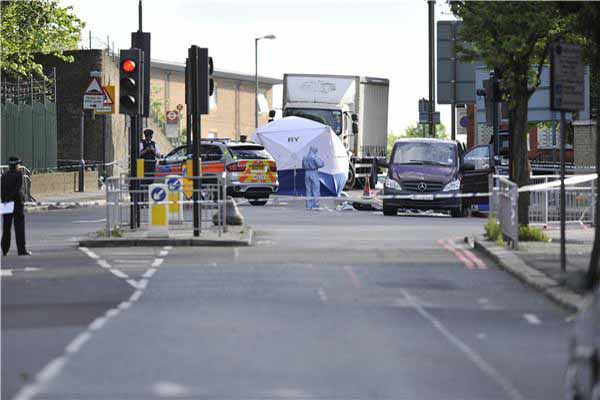 Britain was shocked after two attackers butchered and attempted to behead a soldier in a brutal daylight attack on a busy London street on May 22, raising fears terrorism had returned to the country. Chilling amateur footage of one of the suspects shows him with bloody hands and still holding a blood-stained knife and meat-cleaver, telling a member of the public: “You people will never be safe.”  “We swear by almighty Allah we will never stop fighting you. The only reason we have done this is because Muslims are dying every day,” the black man in his 20s or 30s, wearing a wool jacket and jeans and speaking with a local accent, shouted in the footage. “We must fight them as they fight us. This British soldier is an eye for an eye, a tooth for a tooth … I apologize that women had to witness that, but in our lands our women have to see the same thing. You people will never be safe. Remove your government. They don’t care about you,” the videotaped man said before crossing the street and speaking casually to the other attacker.  The Muslim Council of Britain described the attack as “a truly barbaric act that has no basis in Islam.” The suspects were shot by police after the attack and spent the night in separate hospitals under armed guard.

British Prime Minister David Cameron said the brutal killing of a soldier who was hacked to death was a betrayal of Islam. “We will never give in to terror or terrorism in any of its forms,” Cameron told reporters outside his Downing Street residence today.

“This was not just an attack on Britain and on the British way of life, it was also a betrayal of Islam and of the Muslim communities who give so much to our country. There is nothing in Islam that justifies this truly dreadful act.” Cameron cut short a visit to Paris May 22 to fly back for a meeting of the government’s emergency response committee, COBRA, which had already met in the hours following the attack. The head of MI5, the domestic intelligence agency, attended the meeting along with the defense and interior ministers, the head of Scotland Yard and London mayor Boris Johnson.

One of the attackers was British-born and of Nigerian descent, a source with knowledge of the investigation said. The other man may also be British with a Nigerian background, the source said.  Local media named the man who was definitely born in the country as 28-year-old Michael Adebolajo and said police raided the home of his family in a village near the eastern English city of Lincoln. Both men appeared to have converted to Islam from Christian immigrant backgrounds, British media said. Counter-terrorism police have also launched a large-scale investigation into the killing. A British government official said both suspects were part of previous security services investigations for possible terror links.

The official, who spoke on condition of anonymity, said he could not provide other details because the suspects may face trial. The British flag was lowered over the Woolwich barracks, which was the venue for shooting events at the London 2012 Olympics, and flowers have been laid outside.

Security has been tightened at military barracks and authorities said they are updating their guidance for military personnel. Across London there are 1,200 extra police officers on duty in response to the attacks.