Brexit: Boris Johnson in last push to get deal through

Boris Johnson will urge MPs to back his Brexit deal in a final bid to get the UK to leave the EU in nine days' time. 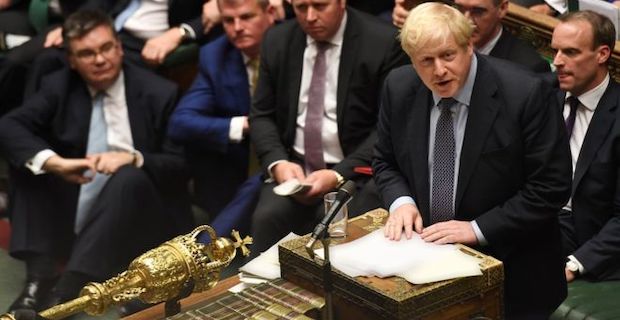 MPs will vote on the PM's Withdrawal Agreement Bill and if they back it they will be asked to approve a three-day timetable to consider the legislation. But the decision to curtail the scrutiny of the bill to three days has sparked anger from opposition MPs. The BBC's Norman Smith said the PM looks set for a "deeply damaging" defeat over the timetable.

However, the prime minister seems on course to win an important symbolic victory with MPs poised to back his Brexit bill in principle, our assistant political editor added.

MPs will begin a number of votes on Mr Johnson's Withdrawal Agreement Bill, which was published on Monday, at about 19:00 BST.

Elsewhere, European Council President Donald Tusk has told the European Parliament in Strasbourg he is consulting the 27 EU leaders on how to react to the UK's request for a Brexit delay and "will decide in the coming days".

Ministers have insisted they are confident they have the numbers to get the Withdrawal Agreement Bill approved, despite losing a crunch Commons vote on Saturday aimed at ruling out a no-deal Brexit.

MPs believed by ministers to be ready to back the prime minister include pro-Leave Labour rebels and former Tory MPs now sitting as independents who would rather leave with Mr Johnson's deal than no deal at all.

If MPs back the bill, they will then vote on the government's "programme motion", which sets out the timetable for the legislation's passage through the Commons.

On Monday, Leader of the Commons Jacob Rees-Mogg said: "People who do not vote for the programme motion will not be voting for Brexit on October 31."

Keywords:
Boris JohnsonBrexitWithdrawal Agreement Bil
Your comment has been forwarded to the administrator for approval.×
Warning! Will constitute a criminal offense, illegal, threatening, offensive, insulting and swearing, derogatory, defamatory, vulgar, pornographic, indecent, personality rights, damaging or similar nature in the nature of all kinds of financial content, legal, criminal and administrative responsibility for the content of the sender member / members are belong.
Related News