Bradley Manning could face a de facto life sentence of more than 100 years in jail. 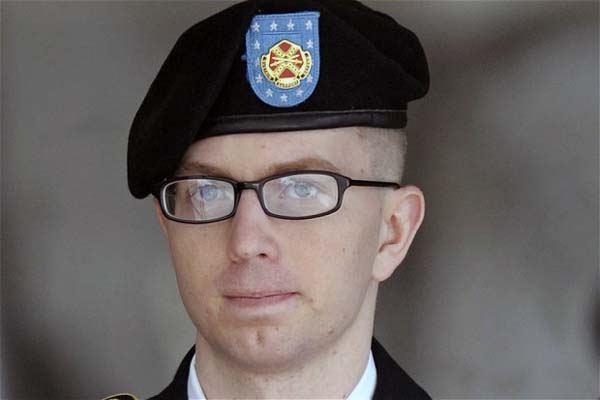 A us military judge convicted Bradley Manning of espionage Tuesday, leaving him facing a lengthy jail term despite clearing him on the most serious charge that he 'aided the enemy.' Colonel Denise Lind found Manning guilty of 20 of 22 counts related to his leaking of a huge trove of secret us diplomatic cables and military logs to the WikiLeaks website. She said she would begin sentencing hearings on Wednesday, at the Fort Meade military base outside Washington where the trial was held. If Lind decides to impose penalties in the higher ranges permitted under the charges, the now 25-year-old Manning could face a de facto life sentence of more than 100 years in jail.

"On charge one, court finds you not guilty," Lind told the hearing, before reading the long list of lesser counts on which Manning was found guilty of breaching the espionage act or disobeying orders.

The court was silent and Manning, a boyish young man in an army dress uniform and round glasses, showed no emotion before the live feed to the press room was cut.

Some freedom of information activists will welcome the news that he was at least cleared of knowingly aiding us foe Al-Qaeda by leaking secrets to be published on the Internet.

But there have been warnings that the case, and the harsh penalties Manning could still face, could deter whistleblowers and have a chilling effect on future media investigations.

A few dozen protesters had gathered outside Fort Meade to support Manning and WikiLeaks, the anti-secrecy group set up by Australian cyber-activist Julian Assange, expressed fury at the verdict.

In a Twitter message, the WikiLeaks group said the court's decision reflected "dangerous national security extremism" on the part of us President Barack Obama's White House.

It also said the conviction of Manning set a "very serious new precedent for supplying information to the press."

His supporters have cited Manning's trial as proof that Snowden was right to flee abroad with his leaks rather than face trial at home.

The best known us rights group, the American Civil Liberties Union, gave a measured response to the verdict, but reiterated its concern about the use of draconian anti-spying laws to curtail government whistleblowers.

"While we're relieved that Mr. Manning was acquitted of the most dangerous charge, the ACLU has long held the view that leaks to the press in the public interest should not be prosecuted under the Espionage Act," said Ben Wizner, director of the ACLU Speech, Privacy and Technology Project.

"Since Manning already pleaded guilty to charges of leaking information -- which carry significant punishment -- it seems clear that the government was seeking to intimidate anyone who might consider revealing valuable information in the future."

Private Manning was serving as a 23-year-old intelligence analyst in Iraq when he sent WikiLeaks a cache of secret diplomatic cables and classified military reports from the wars in Iraq and Afghanistan.

He had admitted giving the site some 700,000 documents and pleaded guilty to 10 lesser charges, while firmly denying that he had intended to help America's enemies.

But the prosecution insisted Manning recklessly betrayed his uniform and his country by leaking documents he knew Al-Qaeda would see and use.