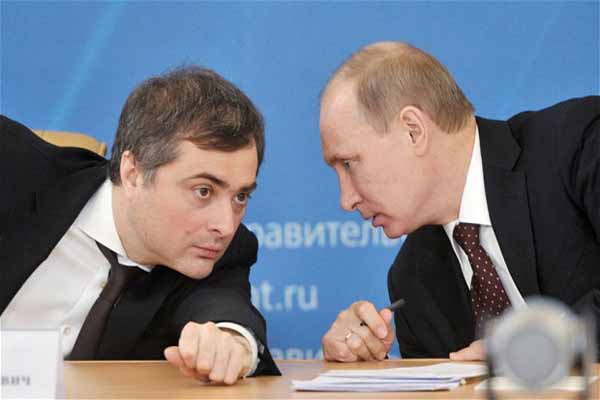 Russian President Vladimir Putin on Wednesday dismissed his influential deputy prime minister Vladislav Surkov credited with designing the country's notorious political system.  Prime Minister Dmitry Medvedev's spokeswoman Natalia Timakova told AFP that Surkov tendered his resignation on April 26. The Kremlin said in a statement that Surkov had left his post voluntarily, but analysts and observers said the former Kremlin grey cardinal had been forced out amid a growing rift between Putin's Kremlin and the government. Surkov, 48, had served as deputy prime minister after being dismissed from the post of first deputy Kremlin chief of staff in a shakeup in December 2011 that coincided with huge opposition protests that shook Russia that winter. He worked in the Kremlin administration from 1999 before his unexpected transition to the government seen at the time as the Kremlin's reaction to the mass anti-Putin protests in 2011.

His departure comes amid what observers describe as signs of growing infighting among Kremlin elites during Putin's controversial third term and an ongoing probe of a high-tech fund backed by Surkov. Putin's spokesman said Surkov's departure should not be seen in connection with the investigation at the Skolkovo fund.

Instead, he suggested that the deputy prime minister quit because of the government's poor implementation of Putin's election promises.

"It is related to the priority topic and the high-priority task of implementing presidential decrees," Dmitry Peskov told the Kommersant FM radio.

Surkov declined to talk about his future plans with the media, telling Kommersant that he will explain it "when the time is right."

He has been considered the top ideologue of Putin's domestic political strategy who oversaw political parties in parliament, electoral campaigns and the tightly controlled media.

He is known for coining the term "sovereign democracy" to describe Russia's tightly controlled political system and was once called the "Kremlin puppeteer" by billionaire Mikhail Prokhorov.

The departure of Surkov, who had for the past year and a half been in charge of modernising the Russian economy, comes as Russian investigators are probing the Skolkovo hi-tech fund where Surkov sits on the supervisory board.

Last month, the hugely powerful Investigative Committee, Russia's equivalent of the FBI in the United States, accused one of the fund's senior executives of giving $750,000 to an opposition lawmaker.

Surkov has publicly defended the fund, saying in a recent speech at the London School of Economics that investigators should hold their "artillery fire" on Skolkovo, which may damage the sensitive project. "Maybe one should not speak so loudly about possible violations before a court decision," he said in televised remarks.

The speech proved largely controversial and drew a sharp rebuke from the chief spokesman of the Investigative Committee, whose spokesman Vladimir Markin accused Surkov of criticising Russian officials from abroad.

"How long would a member of Her Majesty's Cabinet be able to hold on to his post if he, while on a private visit to Moscow, publicly condemned Scotland Yard for performing its direct duties?" Markin said in an acidly-worded article published Tuesday in the pro-Kremlin Izvestia daily.

When asked to comment on Markin's article, Surkov, known as a media-shy intellectual who himself dabbles in literature, said he would not comment on "graphomania".

Observers say the highly unusual spat between Surkov and Markin highlights increasing rifts between the powerful Kremlin elites, particularly the security hardliners and more liberal officials that have supported Medvedev.

Russia's opposition politician Boris Nemtsov said Putin "no longer needed" Surkov as he increasingly listened to the hardliners in his circle.