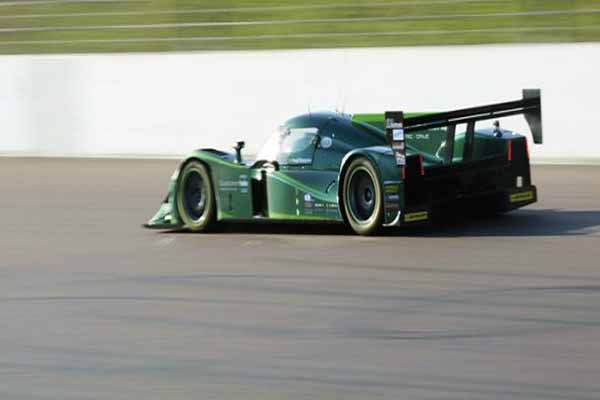 Chief executive Lord Drayson, who was behind the wheel, said the achievement was designed to highlight electronic vehicle technology's potential.

The previous 175mph record was set by Battery Box General Electric in 1974.

Drayson Racing is not the only electric vehicle-maker hoping to use motorsport to spur on adoption of the technology.

The firm intends to enter the vehicle into next year's Le Mans 24 race saying the competition would act as a "challenging test bed" for technologies that could eventually find their way into road cars.

Drayson Racing was founded in 2007 by self-declared "car nut" Paul Drayson, who was then a minister in the Labour government.

The firm, based in Kidlington, Oxfordshire, works with others to develop more sustainable automotive technologies and uses motorsport competitions as a means to focus its efforts.

Lord Paul Drayson The driver, Lord Drayson, was Minister of Science in the last Labour government
In order to qualify for an attempt on the Federation Internationale de l'Automobile's (FIA) world electric land speed record it had to make its vehicle weigh less than 1,000kg (2,204lb) without the driver.

To do this it adapted a Le Mans Series car it had previously designed which originally had a bio-ethanol fuel engine and replaced the part with a lightweight 20 kilowatt hour battery offering 850 horsepower.

It also adapted the vehicle's chassis, which is made out of recycled carbon fibre, to minimise air friction.

"What it, I hope, shows to people is just what the future potential of electric cars is," Lord Drayson told the BBC shortly after his record-breaking time was confirmed.

"Obviously this is a very special racing car, but by setting this new world record here in Britain we say two things.

"One it is a pointer to the future - the technology that we developed for this car will filter down to the cars we use every day.

"Google has a very active R&D programme with regard to electric vehicle technology so it's great that one of the world's leading technology companies came to our event today," Lord Drayson added.

Drayson Racing's attention will now switch to the launch of the FIA's Formula E championship, which is due to begin in September next year.

London will host the first electric car race. Rome, Miami, Beijing and Rio de Janeiro are among the other seven locations.

A different vehicle - similar to a Formula One machine - is being developed for the firm by Singapore's Spark and Surrey-based McLaren for the first year of the competition.

However, Drayson Racing plans to build its own machine for the 2015 competition using some of the same components used in its record breaking Lola B12 69/EV.

One analyst said such such efforts were an excellent way to promote electric cars, but questioned how many of the technologies being developed would actually find their way onto the road.

Nissan Zeod RD Nissan showed off its own "zero emission" racing car which it plans to compete with from 2014
"I think that any kind of competition-led design will have spin-offs - it might be that electric motors become more efficient," said Paul Newton, auto analyst at IHS Global Insight.

"The problem is that making an electric car go faster is relatively straightforward.

"Making it go further and become more practical is infinitely more difficult, and that's down to the basic physics of how batteries store energy and release it."