Parents worry about how excessive mobile use is affecting their children but struggle to tame their tech habits, suggests a survey. 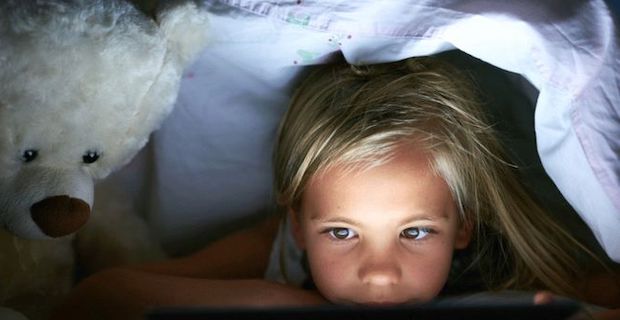 It found that 43% of 7,000 parents across Europe who were surveyed were concerned that using gadgets meant their children slept poorly.

Others feared what tablet and phone use did to social skills (38%) and children's mental health (32%).

Compiled by security firm Norton, the survey the parents what their children - ranging in age from five to 16 - did with gadgets, and how long they spent staring at them.

Based on the findings, children now seem to crave screen time with their tablets and phones more than they do sugar and sweets. British children were more likely to be looking at a screen than playing outside, and almost a quarter - 23% - were online more than their parents.

On average, it found, British children spent three hours a day on their screens.

"The old challenges of getting children to eat their greens, get to bed on time and do their homework are all still there, but there is an added layer of technology that parents have to navigate," he added.

The fact that few parents grew up with connected devices often left them struggling to cope and work out what were good rules, said Mr Shaw.

Parents were also conflicted because they saw the value in their children being familiar with technology, he said. About 60% of those asked said the technology helped their children learn and almost as many - 53% - said it made their offspring happy.

The survey revealed that 9% of parents questioned set no rules on use, and 65% let their children use gadgets alone in their bedrooms. And 49% said they wanted to set limits but were not sure how to go about it.

Of thoser questioned, 43% lamented that children would be able to get around the rules and restrictions they put in place.

"We all should be mindful of how much time we spend online and tackle the issue of excessive screen time, with parents setting a good example," said Mr Shaw, adding that 58% of the surveyed parents now had "tech-free" times or days when everyone put their gadgets away.

Keywords:
Childrens Tech Habits
Your comment has been forwarded to the administrator for approval.×
Warning! Will constitute a criminal offense, illegal, threatening, offensive, insulting and swearing, derogatory, defamatory, vulgar, pornographic, indecent, personality rights, damaging or similar nature in the nature of all kinds of financial content, legal, criminal and administrative responsibility for the content of the sender member / members are belong.
Related News