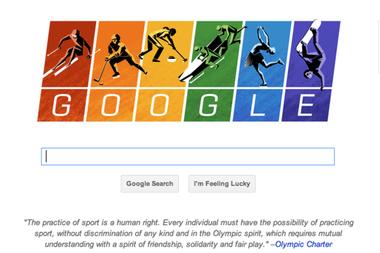 A piece of the Olympic Charter is quoted beneath illustrations of several Winter Olympic sports: "The practice of sport is a human right. Every individual must have the possibility of practicing sport, without discrimination of any kind and in the Olympic spirit, which requires mutual understanding with a spirit of friendship, solidarity and fair play." The doodle is reportedly a response to Russian anti-gay legislation, signed into law last year by President Vladimir Putin, with a vow to enforce it during the Winter Olympic Games, which are being held in Sochi, Russia, now through Feb. 23. The law can impose fines on individuals accused of spreading "propaganda of nontraditional sexual relations" to minors, and even proposes penalties for expressing these views online or in the news media. Gay pride rallies also are banned. The Olympic Charter, as found on the Olympic.org website, "is the codification of the Fundamental Principles of Olympism, Rules and Bye-Laws [sic] adopted by the International Olympic Committee (IOC)."