Wednesday morning, Google woke from troubled dreams, and found its logo transformed into a giant cockroach. 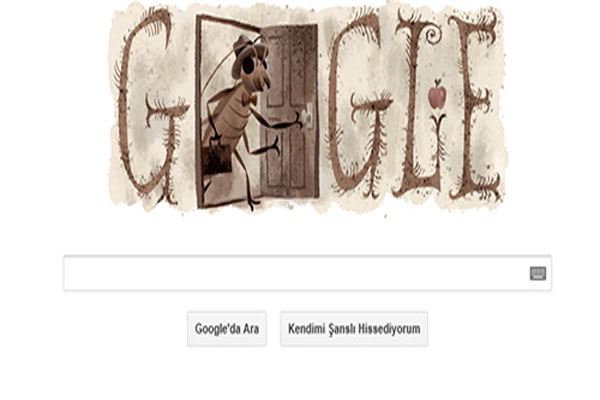 Google celebrated author Franz Kafka's 130th birthday with a Doodle illustrating the author's famous novella The Metamorphosis, which tells the story of a man who is explicably turned into a man-sized bug. If you've never read the book, you've perhaps heard its famous opening line referenced in movies or video games: "One morning, when Gregor Samsa woke from troubled dreams, he found himself transformed in his bed into a horrible vermin."  The existentialist themes in this work and others became Kafka's signature. His characters are often left do deal with absurd and hopeless situations all alone.

Kafka has influenced many of the 20th century's greatest writers, including Vladimir Nabokov and Gabriel García Márquez, who said that reading Kafka's The Metamorphosis changed the way he thought about writing. "When I read the line I thought to myself that I didn’t know anyone was allowed to write things like that," Márquez said. "If I had known, I would have started writing a long time ago."

Kafka's work continues to live a full life on the Internet. Today, much of Kafka's work is available for free online in its original German through The Kafka Project. The website for The Kafka Project is "intended to give scholars and Kafka fans a virtual forum to share opinions, essays and translations."