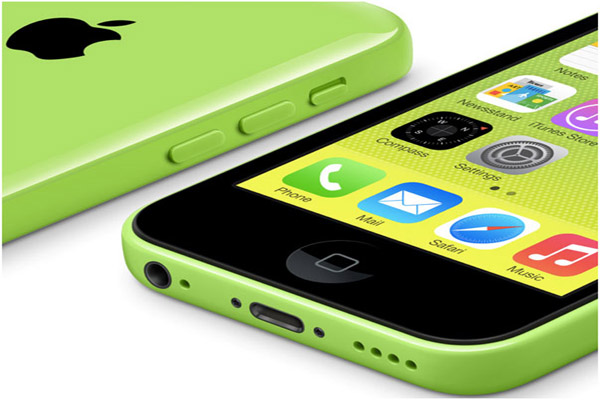 Apple has introduced the new colourful plastic iPhone 5C and enhanced iPhone 5S at an official launch event in San Francisco. Announcing two iPhone in same event was the first time in Apple history. Also releasing date of iOS7 was announced. Apple has finally introduced its first budget-orientated smartphone, the iPhone 5C. “C” comes from colour and this is major feature of new iPhone 5C which comes in green, blue, yellow, red and white. Apple says “another reason to love iPhone.” Even though iPhone 5C is very much alike with iPhone 5 in performance and features the main difference lies in design. iPhone 5C has 4” screen as it is in iPhone 5. However the shell is not aluminum but a polycarbonate plastic. Beneath the smooth surface of the seamless outer shell, a steel-reinforced frame provides structural integrity. Reason lies behind this choice is that it could not be possible toachieve these colors in aluminum case. Hence steel inside it is used as antenna. Being one-piece is another feature of these shells. There is no junction point in anywhere on the shell like iPhone 5’s. This provides brighter and better look for new iPhone 5C. In addition to colorful iPhones, Apple introduced new silicon iPhone 5C cases which will be produced and sold by Apple itself. New cases come from 6 different colors as white, red, yellow, blue, green and black. They have got holes which make original color of iPhone visible and give customers chance to create any of 30  combinations they like on their new iPhone.

Although iPhone 5C is different than iPhone 5 in the perspective of design and shell, their technical specs are almost the same. Their cameras, screens, Home button and much more other specs are similar. ThereforeiPhone 5C provides a longer battery life. It has up to 250 hours standby time and up to 10 hours on 3G talk time whereas iPhone 5 has 225 hours standby and 8 hours 3G talk time. So iPhone 5C has an A6 CPU, 1 GB RAM, 8 MP iSight camera on back with 1080p supported video record and 1.2 MP FaceTime camera on front with 720p supported video record.

So these are the reasons why Apple terminates production of iPhone 5. From now on iPhone 5C will be produced and sold instead. There is no reason foriPhone 5 users Prices appeared on press conference as $99 and $199, do not misguide you. These are the contracted price. If you live besides the US you must look up unlocked iPhone prices which are $549 for 16 GB and $649 for 32 GB.

New iPhone 5C will be launched on the 20th of September with pre-orders taken from the 13thin several countries. Finally it will come with the brand new iOS7.

As expected, the new iPhone 5S will be available in silver, space grey and gold colors reteaining the same glass-aluminium body from the iPhone 5 with some little differences.

Besides colors,schematic features of new iPhone 5S is same with iPhone 5. Its depth is 7.6mm and weight is 112 grams with same aluminum case. There are a few ways to differentiate iPhone 5S from iPhone 5; Home button and flash lights.

Like in iPhone 5C, Apple will produce and sell special leather cases for iPhone 5S in again 6 different colors. iPhone case industry gets larger and larger so Apple wants to play a role in it. I have to say cases are look beauty and qualified.

The biggest shift in new iPhone’s specs is its processors. iPhone 5S has got two processors , A7 and M7. A7 CPU is the first 64-bit desktop-class architecture proccessor that is build and used in a phone. It gives you CPU and graphics performance up to 2x faster than A6 chip which is used in iPhone 5. It also should be up to 40x faster in terms of CPU performance and 56x faster for GPU tasks than the first original iPhone and can run OpenGL 3.0 games for the first time in iPhone history. Thus because iOS7 was built specifically for 64-bit, it’s uniquely designed to take advantage of the A7 chip. The Infinity Blade 3 demo in conference was stunning and showed the power of new A7 chip.

The bigger one is A7 and the small one in the white box is M7 chip.

Then there is an M7 coprocessor chip which is exclusive for iPhone 5S. It handles accelerometer, compass and gyroscope duties. It can tell whether you're driving, walking or stationary and app developers will be able to tap into it in combination with GPS. So basically M7 will ease the responsibilities of A7 processor which turns out to a longer battery life. In speak of which, iPhone 5S shows the same battery performance with iPhone 5C that is 250 hours standby time and 10 hours 3G talk time.

As you know lots of firms make health or sport apps or products that use iPhone’s motion sensors. Now all these apps will use the new M7 coprocessor which would reduce both usage of battery and temperature of phone.

The only new physical addition to the iPhone 5S is the TouchID ring built into the home button. The silver ring acts as a fingerprint reader. It will be used to unlock your iPhone and to download apps in a more secure and faster way. Yes, you can use your fingerprints instead of your password. Reader and sensor is so qualified that it can read your fingerprints in any orientation and scans below the epidermal skin layers. Home button is now made from sapphire crystal in order to avoid scratches. You can also enroll your friends’ fingerprints so the new iPhone 5S knows the people you trust, too.

There are lots of speculations about customer privacy. Even though Apple explained fingerprints neither be backed up in iCloud and iTunes nor they are shared to anywhere from the internet, people just do not settle relieved. Honestly I think having most people’s fingerprints in a database could make security agents or polices job much more easier especially in the United States.

Contradiction to expectations iPhone 5S has 8 MP camera as iPhone 5 has. However the camera in iPhone 5S is enhanced in another way. The rear camera sensor is around 15% larger than iPhone 5 and uses 1.5 micron pixels for improved low-light shooting. The f/2.2 aperture is larger too and is paired with a twin-LED flash for even more light when shooting in dark conditions. Apple calls it "True Tone" with one cool white flash and a second warmer amber LED that automatically adjusts depending on lighting conditions for the best picture. In this way you can get better pictures even if resolution stays unchanged.

Enhanced burst mode lets you capture multiple shots of the action by snapping 10 photos per second. Auto image stabilization and slow-motion video are two new features. It shoots video at 120 frames per second at 720p and plays back any section at quarter speed for a dramatic effect. For the first time you can zoom up to 3x in a live video.

iPhone 5S now takes square photos to make it easier to share photos on social network apps such as Instagram, Twitter, Facebook and so on. Panorama photos stay the same and filters are enhanced.

Consequently I can say that the camera is the most improved part of the new iPhone.