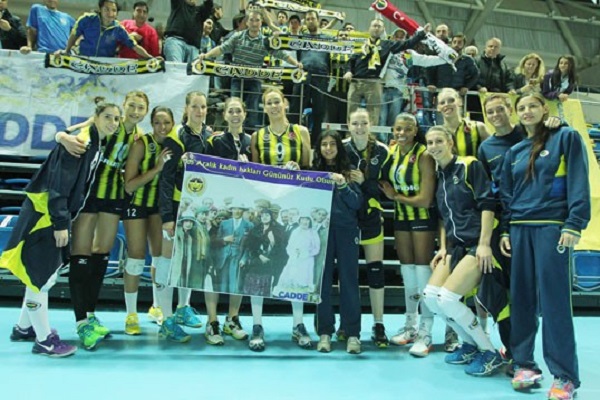 The start of the game was very close with Fenerbahce enjoying the slimmest margin at the first technical time-out (8:7); Aneta Havlickova was the one pacing the home side that also exploited some block-outs by Kateryna Dudnikova. The so-called “Yellow Angels” as the players of Fenerbahce are nicknamed in Turkey broke away after the second technical time-out (18:14) with the mentor of Orbita, Igor Filishtinskiy, seeking help in another break. The guests made another four mistakes as the game resumed and it was their best player Kateryna Silchenkova who handed over the final 25-22 to Fenerbahce.

Orbita started the second set the same way, i.e. with a couple of errors which Fenerbahce used to claim an 8:3 lead at the first technical time-out; Fenerbahce showed very good defense play and with Fernanda Garay and Christina Bauer on fire, the hosts stormed to a terrific 16:6 at the second mandatory stop. With Orbita’s star Silchenkova struggling to find her way into the game, Fenerbahce had an easy mission to accomplish and comfortably seized also the second set (25-14).

However, the hosts could not show that same quality in the opening of the third set where they trailed 1:5 to make their mentor Marcello Abbondanza very unhappy. Silchenkova and Dudnikova were finally playing their best for Orbita before Fenerbahce fought their way back (9:11) with some good blocks and defense actions. Fernanda Garay anchored the home heroines on their way to a straight victory especially with her stellar performance from the service line to finish it off at 25-16 waiting now for the return game coming up next week in Ukraine.