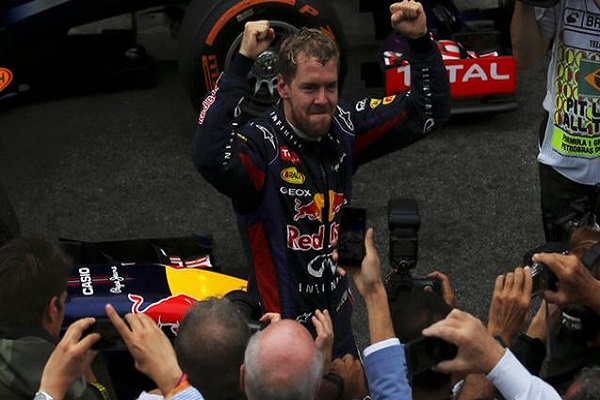 At the Brazilian Grand Prix in Sao Paulo on Sunday, Sebastian Vettel's win in the final race of the season give him his ninth straight race victory of the season – tying a mark set by Alberto Ascari in 1952-53 – and equaled Michael Schumacher's mark of 13 total wins in a season, set in 2004.

A nice young guy - that has been Sebastian Vettel’s image, or at least the one he sought to portray. But this season he has dominated Formula One in a new way, revealing the more sinister side any top driver needs. (27.10.2013)

Vettel, already crowned the driver's champion at the Indian Grand Prix, took the lead by the second lap after starting from pole position, and never conceded it.

Mark Webber, Vettel's teammate at Red Bull, finished second in the final race of his Formula One career. Webber had previously announced he would not continue racing F1 cars and would switch to sportscar racing next year.

In an interview after the race, Webber said his career as an F1 driver was "a great journey, one which I am proud of."

Vettel paid tribute to his teammate despite a relationship that was tense at times, most notably at the Malaysian Grand Prix earlier in the season.

"We didn't have the best relationship, but we respected each other and I was able to learn a lot from him," Vettel said.

Joining Vettel and Webber on the podium was third-place finisher, Fernando Alonso from Ferrari.

While Vettel and Red Bull had already secured the driver and constructor titles, second place in the constructor standings was up for grabs. Coming into the race, Mercedes was in second with 348 points, trailed by Ferrari with 333.

Ferrari suffered from a drive-through penalty issued halfway through the race to Felipe Massa, allowing Mercedes' Lewis Hamilton to pass. Later in the race, Hamilton lost ground when he bumped with Valtteri Bottas and sustained tire damaged. He was able to limp back to the pits and get a new tire, but was also given a drive-through penalty. As a result, Massa finished ahead of Hamilton, but it wasn't enough to propel Ferrari into second place in the constructor standings