England will attempt to qualify for their first European Championship semi-final for 25 years when they face Ukraine at Euro 2020 on Saturday. 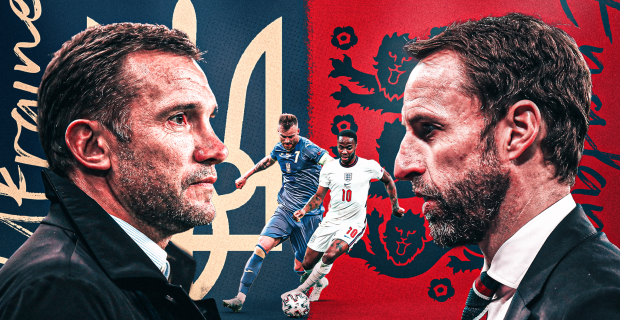 Having ended a 55-year wait for a knockout-tie victory over Germany at an ecstatic Wembley on Tuesday, Gareth Southgate's side will face the Czech Republic or Denmark at the national stadium if they win in Rome.After playing their first four games at Wembley, Saturday's match in Italy's capital - at 20:00 BST - is England's first away from home at Euro 2020.Covid travel restrictions mean fans in the UK have been told not to travel to the game, so there are likely to be more Ukraine fans in the Stadio Olimpico than England supporters.

Southgate, who guided England to the semi-final of the World Cup in 2018, said: "Our players were used to playing in front of no fans last season and having to create their own atmosphere.

"You need leadership on the pitch in these moments and we have got some very good leaders."

Should England win, they would reach the semi-finals of the European Championship for the first time since Euro 96.Winger Bukayo Saka suffered a "slight knock" in training on Friday but other than that the Three Lions have a fully-fit squad.However, Southgate has to decide whether to keep the same starting line-up that played against Germany or make changes.

He implemented a 3-4-3 formation for the win against Germany and he must decide whether to revert to a back four.

Midfielder Jack Grealish came on as a substitute in that win with the score 0-0 before laying on the assist for Harry Kane to make it 2-0 after Raheem Sterling had opened the scoring.Midfielder Mason Mount was an unused substitute after only just completing self-isolation, and could return to the side.

Four players would miss a potential semi-final if they receive a yellow card against Ukraine, including defender Harry Maguire and midfielders Kalvin Phillips and Declan Rice. All three were booked against Germany and a second yellow would trigger an automatic ban for the next game. Forward Phil Foden was booked in the first group game against Croatia but did not play against Germany.

"We won't make any decisions based on yellow cards," added Southgate. "It would be an insult to Ukraine."

Ukraine will be without forward Artem Besedin for approximately six months after suffering a knee ligament injury in the last-16 win over Sweden.

Captain Andriy Yarmolenko, who has scored two goals in four games at Euro 2020, was forced off in that game with an apparent injury but is hoping to be fit.

Yarmolenko is one of four players on a yellow card, with the other three Artem Dovbyk, who hit the 120th-minute winner against Sweden, Mykola Shaparenko and fellow midfielder Serhiy Sydorchuk.

Whatever happens in Rome, Ukraine have already made history by reaching the knockout stage for the first time.

Managed by one of their greatest players - and 2004 Ballon d'Or winner - Andriy Shevchenko, they lost two of their three group games but advanced as one of the best four third-placed nations at the 24-team tournament.They were involved in a dramatic last-16 tie against Sweden, Artem Dovbyk scoring in added time in extra time to set up a quarter-final with England.

"We are here and this was our chance to change the future and we did it," said former Chelsea forward Shevchenko. "England are a great team, a lot of great players and a great manager. It will be a hard game for us."

Ranked 24th in the world, 20 places below England, they have beaten the Three Lions just once in seven attempts, a 1-0 World Cup qualifying success in 2009.Ukraine's team features two players who play for clubs in the Premier League - West Ham's Yarmolenko and Oleksandr Zinchenko, who has won three Premier League titles, four League Cups and one FA Cup since joining Manchester City five years ago.

Southgate said: "Ukraine have got a threat with their forwards and they have tremendous sprit. They showed that against Sweden."

England haven't conceded a goal yet and Southgate knows his side will always get chances in games - a return to Wembley for the semi-final is beckoning them.

According to Simon Gleave, head of sports analysis at data company Nielsen's Gracenote, England are now favourites to win Euro 2020.

"Ukraine are the lowest ranked team to make it this far at Euro 2020 as they are currently ranked 30th in the world by Gracenote's world ranking," said Gleave.

"In our pre-tournament forecast, England were second favourites to win Euro 2020 with an estimated chance of 13.6%.

"Having reached the quarter-finals and with potential home advantage to come later in the competition, this has grown to 26.5%, making England favourites to win Euro 2020."

England have lost just one of their seven meetings with Ukraine in all competitions (W4 D2), a 1-0 defeat in October 2009 in a World Cup qualifier. The last two games between the sides have finished level, with this the first meeting since September 2013.

England and Ukraine have met at a major tournament once before, with the Three Lions winning 1-0 in the group stages of Euro 2012, thanks to a Wayne Rooney goal.

Ukraine's only previous quarter-final appearance in a major tournament ended in a 3-0 defeat by Italy at the 2006 World Cup. Ukraine have won two of their last three European Championship matches, more than they had in their first seven in the competition (W1 L6).

Ukraine's West Ham winger Andriy Yarmolenko has either scored or assisted five of Ukraine's eight goals at the European Championship.

At Euro 2020, Ukraine have won two and lost two of their four matches. They have scored six goals including two headers.

Each of England's previous three quarter-final matches at the European Championship have gone to extra time and penalties. After progressing from the first of these against Spain in 1996, England lost in penalty shootouts against Portugal in 2004 and Italy in 2012.

The Three Lions are only the second side in European Championship history not to concede in any of their first four games of an edition of the tournament, after Germany in 2016.

Forward Raheem Sterling has scored three of England's four goals at Euro 2020 so far, while only two players have ever scored more for England in a single edition at the tournament - Alan Shearer in 1996 (5) and Wayne Rooney in 2004 (4).

All four of England goals at Euro 2020 have come from inside the penalty area, including two headers.

Keywords:
Ukraine V England ! Match DateUkraine England DateTimeUkraine England
Your comment has been forwarded to the administrator for approval.×
Warning! Will constitute a criminal offense, illegal, threatening, offensive, insulting and swearing, derogatory, defamatory, vulgar, pornographic, indecent, personality rights, damaging or similar nature in the nature of all kinds of financial content, legal, criminal and administrative responsibility for the content of the sender member / members are belong.
Related News