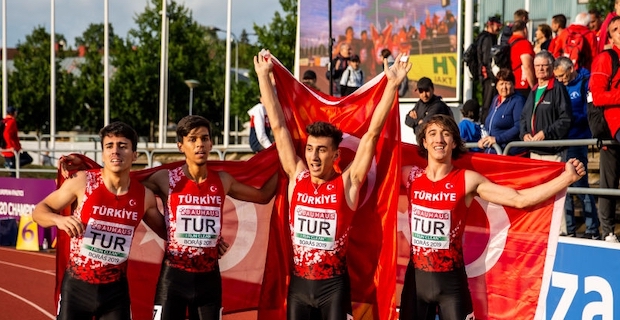 Turkish athletes won gold on Sunday in the European Athletics U20 Championships men's relay final in Sweden.  Oguzhan Kaya, Kubilay Encu, Berke Akcam and Ilyas Canakci won the 4x400 meters final in Boras 2019, beating Czech Republic and Spain. Canakci, 17, who was last given the flag, managed to overtake his French, Italian, Czech and Spanish opponents with a last ditch effort to bring the gold medal for Turkey.

Czech Republic bagged a silver medal as they were only 16 split seconds behind Turkey.

In addition to the gold medal, Turkey set a new record in the 2019 season.

In the medals standings, Turkey were in the 5th spot, overtaking many European athletics powerhouses such as Germany, Spain, host nation Sweden, France and Poland.

Keywords:
Euro Athletics RelayOguzhan KayaKubilay EncuBerke AkcamIlyas Canakci
Your comment has been forwarded to the administrator for approval.×
Warning! Will constitute a criminal offense, illegal, threatening, offensive, insulting and swearing, derogatory, defamatory, vulgar, pornographic, indecent, personality rights, damaging or similar nature in the nature of all kinds of financial content, legal, criminal and administrative responsibility for the content of the sender member / members are belong.
Related News