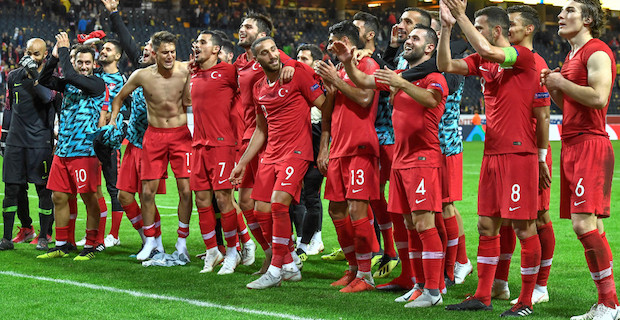 Turkey clawed back from a two-goal deficit to defeat Sweden 3-2 Monday in a UEFA Nations League group match at Sweden’s Friends Arena.

The first half ended 1-0 with a goal by Sweden's Isaac Kiese Thelin. Sweden made it two in the second half with Viktor Claesson.

But shortly after, Hakan Calhanoglu came through for Turkey with a shot that got past goalkeeper Robin Olsen.

Emre Akbaba built on the momentum with two goals, sealing a dramatic 3-2 win for Turkey which saw Sweden defeated at home in their first League B, Group 2 match.

The fifth day of the tournament ended with eight matches.

Other results of the fifth day are as follows:

Keywords:
UEFAUEFA Nations LeagueTurkish National Football TeamSweden
Your comment has been forwarded to the administrator for approval.×
Warning! Will constitute a criminal offense, illegal, threatening, offensive, insulting and swearing, derogatory, defamatory, vulgar, pornographic, indecent, personality rights, damaging or similar nature in the nature of all kinds of financial content, legal, criminal and administrative responsibility for the content of the sender member / members are belong.
Related News