Michael Phelps on Sunday extended his Olympic record medal count to 23 with a gold in the men's 400m freestyle relay on the second day of the Rio Games. 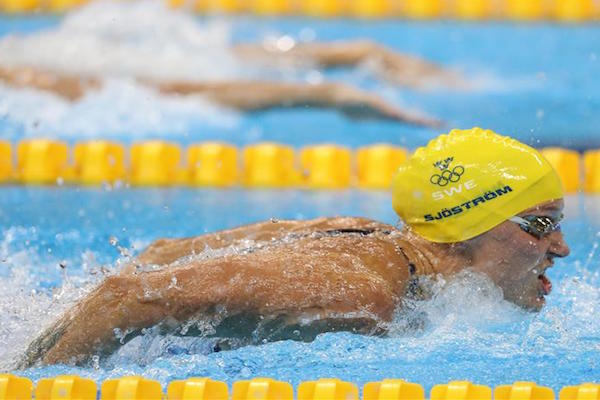 Michael Phelps on Sunday extended his Olympic record medal count to 23 with a gold in the men's 400m freestyle relay on the second day of the Rio Games.

The Olympic legend was joined by fellow Americans Caeleb Dressel, Ryan Held and Nathan Adrian as the team out-touched the French by half a second at 3:09.92, with Australia winning the bronze.

First-time Olympian Adam Peaty of Great Britain won his first gold in the 100m breaststroke, setting two world records in the process, with the first one coming in the heats. It "felt pretty easy", he told NBC News of his 57.13 finish.

Upsets were in the air in the tennis competition as top ranked Novak Djokovic was eliminated in the first round by a resilient Juan Martin Del Potro in two competitive 7-6 sets.

The world’s 145-ranked player suffered a series of injuries that kept him from greatness since his resounding U.S. Open victory against a younger and more dangerous first-seed Roger Federer in 2009.

Meanwhile, Olympic gold continues to be the final hurdle for career Grand Slam holder Djokovic, who will be 33 by the time the Tokyo Games come around in 2020.

Another shocking defeat was suffered by the Williams sisters. Venus and Serena, three-time women's doubles gold medalists and a powerhouse in world tennis, lost their first-ever Olympic match as partners to Czech Republic's Lucie Safarova and Barbora Strycova 6-3, 6-4.

World No. 1 Serena Williams told NBC News the Czech team was "too good.”

Venus suffered an early exit Saturday in the women's singles.

In basketball, Croatia won against higher-ranked Spain 72-70 after Pau Gasol’s shot was blocked at the buzzer by Dario Saric.

Meanwhile in football, the Brazil-Iraq match ended in a goalless draw. It was the second time A Selecao failed to register on the scoreboard after it drew a blank Thursday against South Africa. Brazil has never won an Olympic gold medal in men's football.

Dutch cyclist Annemiek van Vleuten fractured her spine in a crash near the end of the women's road race as she led by more than 40 seconds. Van Vleuten is said to be in stable condition having suffered three minor cracks in her spine.

Oksana Chusovitina became the oldest Olympic gymnast in history when she competed in the vault at age 41, setting off her seventh Olympic campaign over a remarkable 28 years in world-class gymnastics.

And Majlinda Kelmendi became the first athlete from Kosovo to win an Olympic gold medal. The 25-year-old won was best in the 52 kilograms (115 pounds) judo event, the capstone for three years of success that includes two world titles and three European championships for the world No. 1.