Spanish midfielder Asensio may be normally out for 7-9 months, unavailable to play until 2020 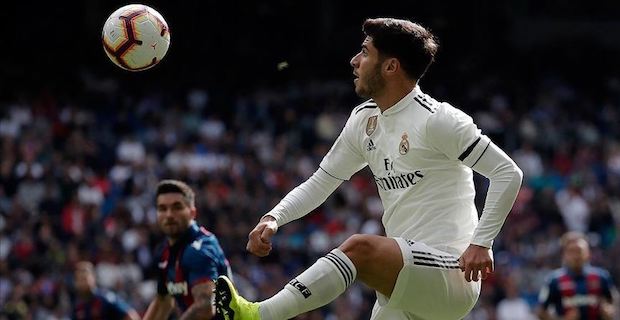 Spanish football powerhouse Real Madrid star Marco Asensio was diagnosed with a major knee injury on Wednesday, the club said. Real Madrid announced on its website that Asensio was diagnosed with a "rupture of the anterior cruciate ligament and the external meniscus of his left knee," by the club's medical services. It added that the midfielder, 23, would undergo knee surgery in the coming days.

Asensio was injured in a preseason match in the U.S. against English club Arsenal.

The Spanish daily Marca reported that Asensio could be normally out for seven or nine months and would be unavailable to play until 2020.

He also won the Spanish top-tier La Liga title with Real Madrid in 2017.

Keywords:
Real MadridAsensio
Your comment has been forwarded to the administrator for approval.×
Warning! Will constitute a criminal offense, illegal, threatening, offensive, insulting and swearing, derogatory, defamatory, vulgar, pornographic, indecent, personality rights, damaging or similar nature in the nature of all kinds of financial content, legal, criminal and administrative responsibility for the content of the sender member / members are belong.
Related News