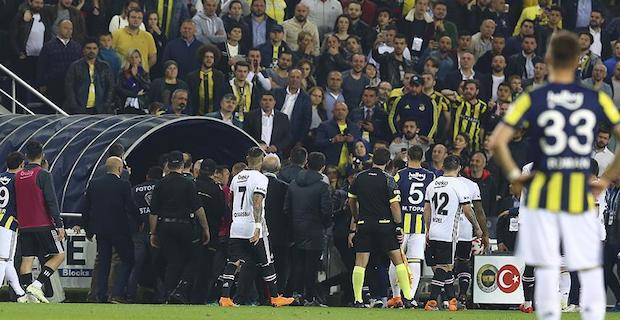 AVRUPA\LONDON  - An Istanbul derby football game called off last week due to violence will pick up where it left off next Thursday, but with no fans in attendance, the Turkish Football Federation ruled today.The Fenerbahce-Besiktas match will pick up with the 57th minute on May 3.The second leg of the Ziraat Turkish Cup semifinal on April 20 at Fenerbahce's home ground, Ulker Stadium, was called off by the referee after Besiktas manager Senol Gunes got injured by objects flung from the stands.Gunes had to get several stitches to his head.After the incident, Besiktas players and the referees left the pitch. The first leg at Besiktas' home ground, Vodafone Park, had ended 2-2.Akhisarspor are the first squad to reach the cup final after eliminating Galatasaray.

Keywords:
Fenerbahce BesiktasFenerbahceBesictas
Your comment has been forwarded to the administrator for approval.×
Warning! Will constitute a criminal offense, illegal, threatening, offensive, insulting and swearing, derogatory, defamatory, vulgar, pornographic, indecent, personality rights, damaging or similar nature in the nature of all kinds of financial content, legal, criminal and administrative responsibility for the content of the sender member / members are belong.
Related News