Over half of world watched FIFA World Cup Russia 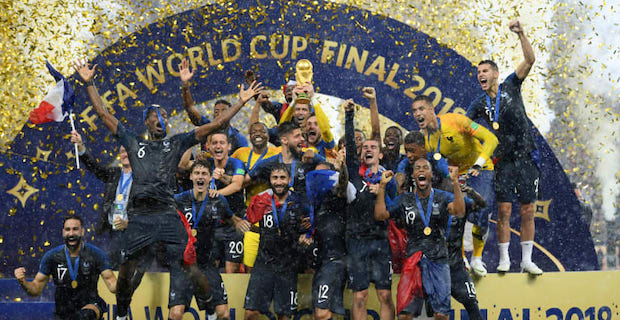 A record 3.572 billion people watched the 2018 FIFA World Cup in Russia on TV or on digital platforms, FIFA said on Friday.

The final match between France and Croatia was seen live by a combined 1.12 billion viewers worldwide, FIFA said in a statement, revealing their data for the World Cup.

The competition was broadcast live in every territory around the world between June 14-July 15, according to the statement.

"A combined 3.572 billion viewers -- more than half of the global population aged four and over -- tuned in to world football’s ultimate competition, according to audience data for official broadcast coverage of the 2018 FIFA World Cup," it said.

Over the 64 matches, the average live audience was 191 million, it added.

FIFA also said: "The global in-home TV audience watching at least one minute of coverage totalled 3.262 billion, while a further estimated 309.7 million people watched no coverage in home but caught the action on digital platforms, in public viewing areas or in bars and restaurants, boosting the total audience by 9.5 percent."

"These figures really do support the claim that Russia 2018 was the best World Cup ever. We’re particularly pleased to see an increase in the average time viewers are engaging with matches, which shows that we are giving the fans what they want," said FIFA’s Chief Commercial Officer Philippe Le Floc’h as quoted in the statement.

Keywords:
FIFA World Cup RussiaWorld Cup Russia
Your comment has been forwarded to the administrator for approval.×
Warning! Will constitute a criminal offense, illegal, threatening, offensive, insulting and swearing, derogatory, defamatory, vulgar, pornographic, indecent, personality rights, damaging or similar nature in the nature of all kinds of financial content, legal, criminal and administrative responsibility for the content of the sender member / members are belong.
Related News