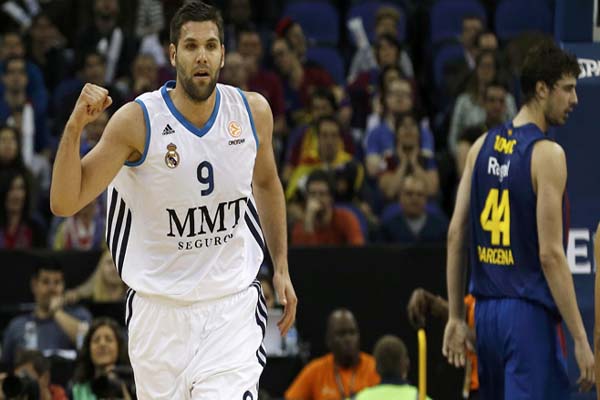 In a rematch of the climax to last year's European season, Olympiakos pulled clear of CSKA Moscow in the first quarter and eventually won 69-52. Real then came back from nine points down in the last quarter to overpower arch-rivals Barcelona 74-67 in the other semi-final.  "We played great defence all the way and that helped us to beat a really tough opponent," Olympiakos captain Vassilis Spanoulis told reporters. "After a very hard season we are back in the final."

Strong defending by forward Kyle Hines helped the Greek side thwart a second-half comeback attempt by CSKA and they easily advanced to the championship match for a second straight year.

Six-times winners CSKA were trying to avenge last year's defeat in the final in Istanbul where they blew a 19-point lead in the second half and lost to a game-winning shot at the buzzer by Georgios Printezis.

CSKA's Sonny Weems, formerly of the NBA's Toronto Raptors, and Olympiakos duo Pero Antic and Hines led all scorers with 13 points each.

"I haven't seen us play like that in a long time," said Weems. "Some of the guys did not show up and it is the worst game we've played the whole season."

Olympiakos contained CSKA to 14 of 45 shots from the field and did a great job of neutralising Serbian playmaker Milos Teodosic.

Having averaged 13 points and five assists up to the Final Four, he recorded just five points and an
assist on May 11.

"The shooting percentages are not always high in a game like this but in the end defence won the game," said Olympiakos coach Georgios Bartzokas.