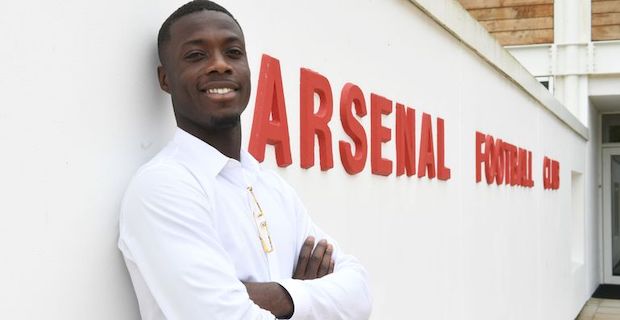 "The 24 year-old Ivory Coast international completed the paperwork on his move on Thursday. He will wear the No.19 shirt," Arsenal -- also known as 'the Gunners' -- said in a statement on website.

"Nicolas is a highly-rated and talented winger who was wanted by many of the top teams in Europe," Arsenal manager Unai Emery said.

The-24-year old forward joined the Ligue 1 club Lille in June 2017 and scored 37 goals in 79 appearances during his two-season spell with the French team.

It added that Pepe inked a contract with his new club Arsenal, keeping him at the Emirates Stadium until 2024.

Ivorian international Pepe also holds a French citizenship as he was born in Mantes-la-Jolie, a commune nearby the French capital Paris.

Keywords:
ArsenalEnglish Premier LeagueNicolas Pepe
Your comment has been forwarded to the administrator for approval.×
Warning! Will constitute a criminal offense, illegal, threatening, offensive, insulting and swearing, derogatory, defamatory, vulgar, pornographic, indecent, personality rights, damaging or similar nature in the nature of all kinds of financial content, legal, criminal and administrative responsibility for the content of the sender member / members are belong.
Related News