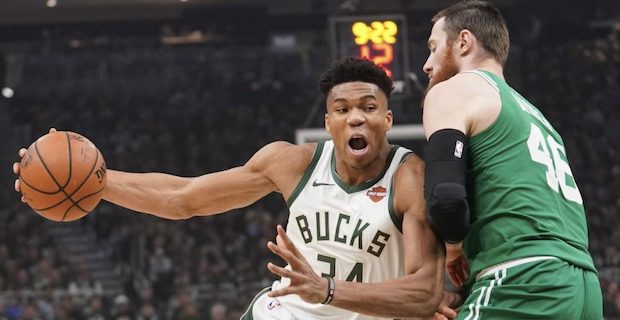 The Milwaukee Bucks defeated the Boston Celtics 116-91 on Wednesday night, won the series 4-1 and advanced to the Eastern Conference Finals. Seven players scored in double figures for the Bucks, led by MVP candidate Giannis Antetokounmpo with 20 points, 8 rebounds and 8 assists. Khris Middleton scored 19 points, Eric Bledsoe helped with 18 in the victory. It's the first Eastern Conference Finals for the Bucks since 2001, when the team missed out the opportunity to appear in the NBA Finals after being defeated by the Philadelphia 76ers. For the Celtics, four players scored in double figures, led by Kyrie Irving with 15 points. Irving shot 6/21 from the field, adding to the non-efficient scoring for him throughout the series. The Bucks will be paired with the winner of the Philadelphia 76ers - Toronto Raptors matchup which is currently ongoing.

The Golden State Warriors defeated the Houston Rockets 104-99 at home on Wednesday night to lead the Western Conference semi-finals series 3-2.

Despite the huge victory, the Warriors are more concerned that superstar and 2-time reigning NBA Finals MVP Kevin Durant was injured.

Durant strained his right calf during the third quarter of the match and went to the locker room, did not continue. He limped after hitting a jump shot with 2.11 left to play in the quarter.

He finished with 22 points, 5 rebounds and 4 assists.

During his absence, Stephen Curry, Klay Thompson and Draymond Green came up big, making sure of the win to lead the series 3-2.

Durant's situation will be questionable if he will travel with the team to Houston for Game 6.

Here is the latest situation in the NBA playoffs:

Keywords:
MilwaukeeBoston
Your comment has been forwarded to the administrator for approval.×
Warning! Will constitute a criminal offense, illegal, threatening, offensive, insulting and swearing, derogatory, defamatory, vulgar, pornographic, indecent, personality rights, damaging or similar nature in the nature of all kinds of financial content, legal, criminal and administrative responsibility for the content of the sender member / members are belong.
Related News