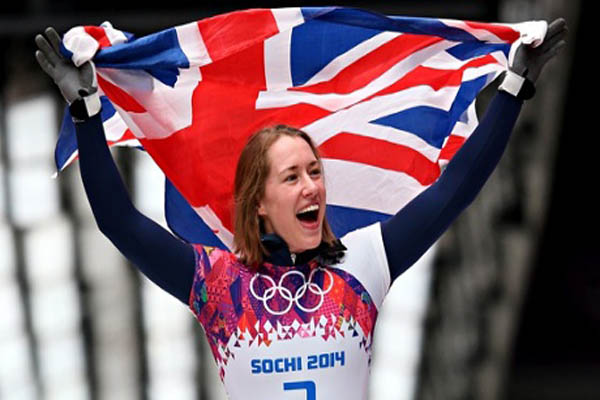 Take off the headphones. Walk slowly out of the changing rooms. Click-clack across the wooden decking. On to the track. Off with the galoshes and then the outerwear, always in the same order. Bend down to the sled, then 16 explosive strides in less than five seconds. Fix your eyes on the first corner. Deep breath. Relax. Lizzy Yarnold, now one of just five British athletes to win individual gold medals in 90 years of the Winter Games, already knew what it would be like to win on the track at Sochi's Sanki Sliding Centre because she had visualised it endlessly. Every one of the 17 corners on the 1500m track. Over and over again, despite only a handful of training runs. Just as she obsessively visualised every corner before every race during her World Cup winning season, in which she won four and finished on the podium in all but one.

It was that combination of serenity and intense focus that saw her deal with the overnight pressure heaped onto her by rivals and an expectant nation and extend a lead of 0.44sec to 0.78seconds following her third run, breaking her own track record. And then to extend it again to almost a full second (0.97) on her fourth, finishing with a total time of 3.52.89.

Between her third and fourth runs she could be spotted wandering around behind the scenes in red Team GB bobble hat, seemingly without a care in the world. From the moment the build up to Sochi began, she has exuded calm and control.

"I knew I had 78 hundredths lead on Noelle [Pikus-Pace, who won silver] but when you start the run it is just like any training run, my processes are exactly the same, my coach is there like normal, and I just knew I should enjoy it and embrace the whole occasion," she said. "I let the sled run a little bit more than I would usually and I just relaxed and loved it. I knew I could really go for it on that last run."

What she won't have visualised is the hurricane of attention about to hit her as the winner of just the 10th gold medal claimed by Britain in winter sport.

Even that is unlikely to faze an athlete so controlled she was able to remember a Valentine's card her boyfriend, James Roche, who is part of the coaching team, to hand to him after winning gold.