Guardiola, It's like a final for us if you want to be there 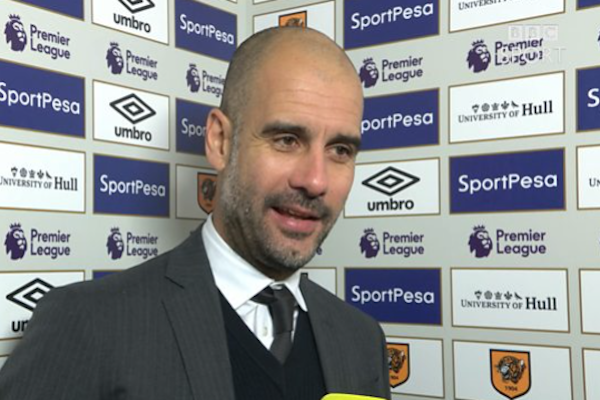 Manchester City boss Pep Guardiola says it will be difficult for his side to keep up with Premier League leaders Chelsea in the title race.

City moved second in the table as they beat Hull City 3-0 on Boxing Day to trail Chelsea by seven points.

Antonio Conte's side earlier set a club record of 12 straight Premier League wins with a 3-0 win over Bournemouth.

"We have played seven more than [Chelsea], which is why it will be tough," said Guardiola.

"Liverpool went so close [to the title] one year because they had one game a week and last year, for Leicester, it happened the same.

"This time Chelsea and Liverpool are the ones."

Both Liverpool and Chelsea failed to qualify for European competition this campaign after finishing eighth and 10th respectively in the Premier League last year.

Manchester City face Monaco in the last 16 of this year's Champions League, with the first leg on 21 February.

In their last season without European football, Liverpool narrowly missed out on the 2013/14 Premier League title to Manchester City, while Leicester won last year's title only playing domestically.

Liverpool will move ahead of Manchester City in the table if they beat Stoke at Anfield on Tuesday.

"Sometimes you play before Chelsea, sometimes later - but it doesn't matter when one team has won 12 in a row," added Guardiola.

"It's like a final for us if you want to be there until the end of the season.

"But football is unpredictable. We have to do absolutely everything to be there. Sometimes when you believe something is done it isn't.

"What we have to do is win every game and analyse and see if that is enough."