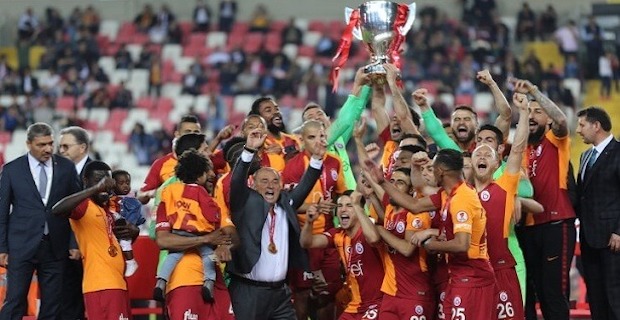 Istanbul football giant Galatasaray beat Akhisarspor 3-1 to win the Turkish Cup on Wednesday. Akhisar's Elvis Manu scored the first goal in the 56th minute at the match held in 4 Eylul Stadium in central Anatolian Sivas province. Galatasaray's goals came from Sinan Gumus in the 80th minute, Sofiane Feghouli in the 88th minute and Mbaye Diagne in the 90th minute. Akhisar's Miguel Lopes received a red card in the 78th minute.  Galatasaray's Diagne also missed a penalty shot in the 65th minute. In the semifinals, Akhisar beat Umraniyespor while Galatasaray defeated Evkur Yeni Malatyaspor to reach the finals.  Galatasaray, the Lions, are the most successful club in the Turkish Cup history having 18 titles as the winners. Akhisar are the 2018 Turkish Cup winners. Already-relegated from Super Lig, Akhisar tried to defend last year's Turkish Cup honors against Galatasaray. From top-tier football league, Akhisar became the first team to relegate to the lower league at the end of this season. Galatasaray are at the top of Turkish league before the last two matches in the season.

Keywords:
GalatasarayTurkish Cup
Your comment has been forwarded to the administrator for approval.×
Warning! Will constitute a criminal offense, illegal, threatening, offensive, insulting and swearing, derogatory, defamatory, vulgar, pornographic, indecent, personality rights, damaging or similar nature in the nature of all kinds of financial content, legal, criminal and administrative responsibility for the content of the sender member / members are belong.
Related News