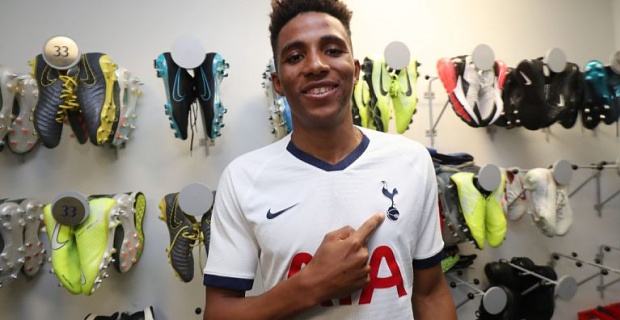 Produced by the academy of Liga NOS side Benfica and debuting professional football last season the central-midfielder played in 42 games through all competitions in 2018/19, scoring 3 and assisting 6 goals. However, Fernandes only appeared in 10 official matches due to injuries this season, assisting once in the Portuguese cup. The young prospect suffered from a metatarsal fracture, missing out on 7 games. The two time Portuguese international also only managed to play three 90 minute games this season.

The new Spurs transfer is currently valued at £13.5m and will wear the number 30 shirt.

When asked about why he chose Spurs he revealed:

“The Premier League is a different competition – every player in the world wants to play in the Premier League. For me, it’s one more motivation because I always dreamed of playing in this league and now let’s make my dream come true. I think we’re going to do fantastic things because this is a fantastic Club.”

With Moussa Sissoko being out until April and Tanguy N’Dombele facing fitness problems, Mourinho suffers from an injury crisis at his new team. Many Spurs fans want to see a versatile midfielder who will solidify their midfield. Will his fellow countryman be the key to resolving Tottenham’s increasing issues in midfield?

Keywords:
BenficaTottenhamSpursFernandesMourinhoHotspurGedson Fernandes
Your comment has been forwarded to the administrator for approval.×
Warning! Will constitute a criminal offense, illegal, threatening, offensive, insulting and swearing, derogatory, defamatory, vulgar, pornographic, indecent, personality rights, damaging or similar nature in the nature of all kinds of financial content, legal, criminal and administrative responsibility for the content of the sender member / members are belong.