Crystal Palace managed to save a point against Manchester City, as a cross from Wilfried Zaha forced Fernandinho to score an unfortunate own goal at injury time. Sergio Aguero turned up late, scoring a brace towards the end of the game. New transfer Cenk Tosun also had a decent game on his first start for the Eagles, scoring a strong header to find the opener. 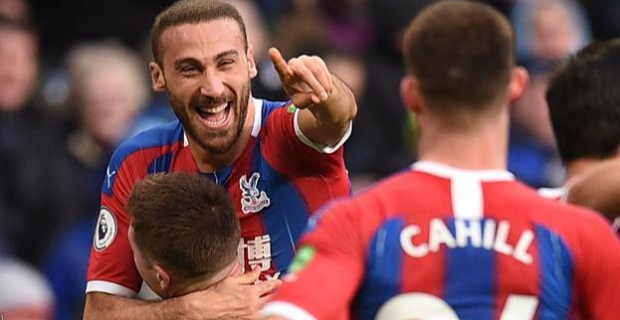 Despite being in-form, both Riyad Mahrez and Gabriel Jesus were rotated to sit on the bench. David and Bernardo Silva started in the line-up instead. Ex-Everton striker Cenk Tosun debuted in the starting line-up for the first time since joining Crystal Palace.

The South London side displayed a strong defensive performance, disallowing Manchester City to break through their wall. Despite being in control of the game and having possession, City failed to find a clear cut chance on goal in the first half.

Palace rarely attempted to go forward, until they won a free-kick on the 38th minute after James McCarthy’s cross was put out for a corner by John Stones. The Glaziers managed to find the opener when Gary Cahill knocked the ball down to Cenk Tosun, who was unmarked at the right side of the 6-yard box. The newcomer scored his first goal for Palace, as he headed the ball across and out of Ederson’s reach. It seemed like a very well organised goal and a good placement from Tosun resulted in a good finish.

Mahrez and Jesus were both subbed on instead of both the Silva’s in the second half, as City pushed on for an equalizer. Tosun was also subbed off for Connor Wickham in the 81st minute.

Pep Guardiola’s substitutions had major impact on the pace of the game. As Sergio Aguero managed to net two goals in the space of 5 minutes, allowing Manchester City to take a 2-1 lead.

Aguero’s initial goal was assisted by Jesus, who crossed it into the six-yard box from the left flank. The Argentinian striker’s run was not picked out by any defenders, as Cahill missed a chance to clear the ball and Aguero punished him for it by poking it into the back of the net (82nd minute).

City managed take the lead on the 87th minute, as Aguero is once again not picked up by the Crystal Palace defenders. A free header from Benjamin Mendy’s cross allowed the striker to score his 15th goal of the season.

With minutes to go until the final whistle, Wilfried Zaha made a driving run through City’s midfield, leaving Rodri and Stones slightly chasing. The Ivorian international winger managed to square the ball into the 6-yard box from the byline, which unexpectedly is hit into the City goal by Fernandinho as he attempts to position himself.

This own-goal sets the final result of the game. Despite City’s last minute attempts, referee Graham Scott blows the final whistle. Manchester City are now on 48 points from 23 games. Premier League leaders Liverpool now have the chance to extend their lead to a 16-point gap, if they come away with a win against Manchester United tomorrow. But the gap could extend further, as Liverpool still have another game in hand after this game week.

Crystal Palace remain 9th in the Premier League with 30 points from 23 games.

Keywords:
Manchester CityLiverpoolCrystal PalaceCenk TosunCityPalaceEaglesGlaziersTosunAgueroSergio AgueroGabriel JesusJesusRiyad MahrezMahrezSilvaConnor WickhamZahaWilfried Zaha
Your comment has been forwarded to the administrator for approval.×
Warning! Will constitute a criminal offense, illegal, threatening, offensive, insulting and swearing, derogatory, defamatory, vulgar, pornographic, indecent, personality rights, damaging or similar nature in the nature of all kinds of financial content, legal, criminal and administrative responsibility for the content of the sender member / members are belong.