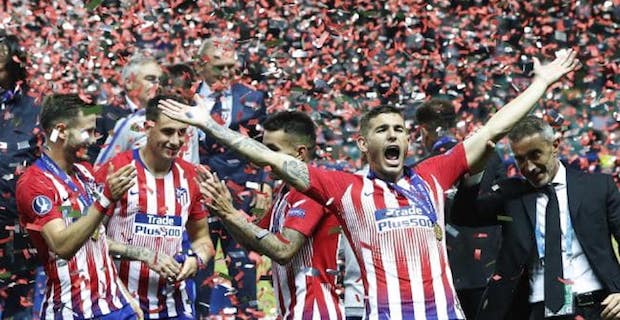 Atletico Madrid won the UEFA Super Cup trophy by beating fierce city rivals Real Madrid 4-2 after extra time Wednesday night.The match at A. Le Coq Arena in the Estonian capital of Tallinn saw Real, who were last season's Champions League winners, pitted against Europa League champs Atletico.Atletico was ahead 1-0 in the first minute of the match when Diego Costa scored the first goal -- the fastest in Super Cup history.Real managed to equalize at 1-1 in the 27th minute with Karim Benzema for the first half.

In 63rd minute, Sergio Ramos scored a penalty to put Real in front 2-1.

But Atletico equalized in the 79th minute thanks to Costa.

Regular time ended at 2-2, so the match went to extra time.

With this result, Atletico Madrid have won the UEFA Super Cup for the third time after victories in 2010 and 2012.

Keywords:
Atletico MadridUEFASuper Cup
Your comment has been forwarded to the administrator for approval.×
Warning! Will constitute a criminal offense, illegal, threatening, offensive, insulting and swearing, derogatory, defamatory, vulgar, pornographic, indecent, personality rights, damaging or similar nature in the nature of all kinds of financial content, legal, criminal and administrative responsibility for the content of the sender member / members are belong.
Related News